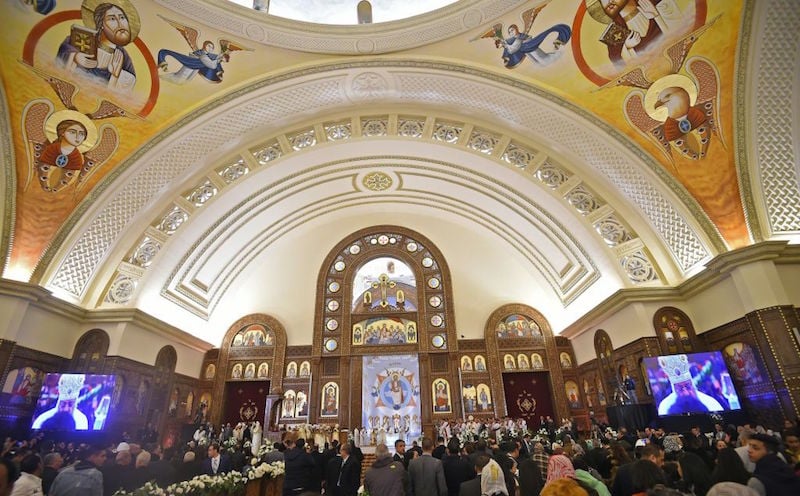 President Abdel Fattah al-Sisi inaugurated Egypt’s largest church and mosque in the New Administrative Capital on Sunday, the eve of Coptic Christmas, in a message of tolerance in the predominantly Muslim country.

Copts, the largest Christian minority in the Middle East, were due hold a midnight mass in the Cathedral of the Nativity, billed by the government as the Middle East’s largest church, a few hours after the inauguration.

Coptic Christians make up an estimated 10 per cent of Egypt’s nearly 100 million people and have long complained of discrimination under laws that favour Muslims.

They have also increasingly been targeted in recent years by Islamist militants including ISIS, which is waging an insurgency in the north of the remote Sinai Peninsula.

Angham, a prominent local singer, sang for Muslim-Christian coexistence as a display of fireworks lit the skies over the two houses of worship.

“This is an important moment in our history,” Sisi said in a speech as he opened the cathedral. “We are one and we will remain one,” he added, referring to Egyptian Christians and Muslims.

“On this day we see you have fulfilled this promise and here we are witnessing a great opening on this grand occasion,” the head of the Coptic church Pope Tawadros II said. He will preside over midnight mass later in the evening with Sisi in attendance.

U.S. President Donald Trump also praised the opening of the church and the mosque.

“Excited to see our friends in Egypt opening the biggest Cathedral in the Middle East. President Al-Sisi is moving his country to a more inclusive future,” Trump tweeted on Sunday.

The Cathedral of the Nativity, adorned with Coptic icons, can accommodate more than 8,000 worshippers while the al-Fattah al-Aleem Mosque can hold nearly double the number. Both are located in the new administrative capital, a major development located some 45 km (28 miles) east of Cairo.

Contractors have been clearing debris from the perimeter of the cathedral in the last two weeks in preparation for its grand opening.

The new Egyptian capital, announced in March 2015, is intended partly to reduce crowding in Cairo but will also be home to government ministries and an airport. The government is expecting to begin moving to the new premises later this year.