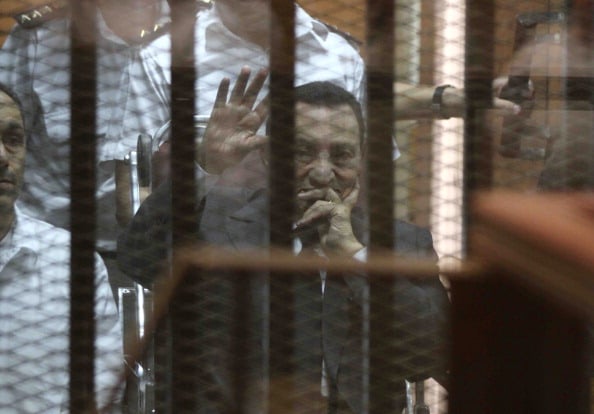 Former Egyptian President Hosni Mubarak denied in court on Wednesday ordering the killing of protesters during the 2011 uprising that ended his 30-year rule.

Mubarak was sentenced to life in prison in 2012 for complicity in the deaths of demonstrators and the breakdown of law and order during the 18-day revolt, but an appeals court subsequently ordered a retrial.

He was freed on those charges but is serving a separate three-year sentence for embezzlement at a military hospital in the upscale Maadi district of Cairo.

Mubarak, who is on trial with his sons and other senior officials, also denied the corruption charges and said he had faithfully served his country for 62 years, first as a military officer and later as president.

Many Egyptians who lived through three decades of autocracy and crony capitalism under Mubarak considered it a victory to see him and his allies behind bars.

But since the ouster of freely elected Islamist President Mohamed Mursi last year by then-army chief Abdel Fattah al-Sisi, some Mubarak-era allies have been freed, raising concern among activists that the old regime was regaining influence.

Sisi, who went on to win a presidential election, vowed that Mursi’s Muslim Brotherhood would cease to exist under his rule.

Hundreds of Islamists have been killed and thousands have been arrested in the past year, many of them sentenced to death in mass trials that have drawn condemnation from Western governments and human rights groups.

At the same time, some of the leading figures of the 2011 revolution have found themselves on the wrong side of Egypt’s new rulers, serving long sentences for taking part in small and non-violent demonstrations after the government issued a law banning protests without permission.

The judge said the verdict in Mubarak’s case is scheduled to be issued on Sept. 27.