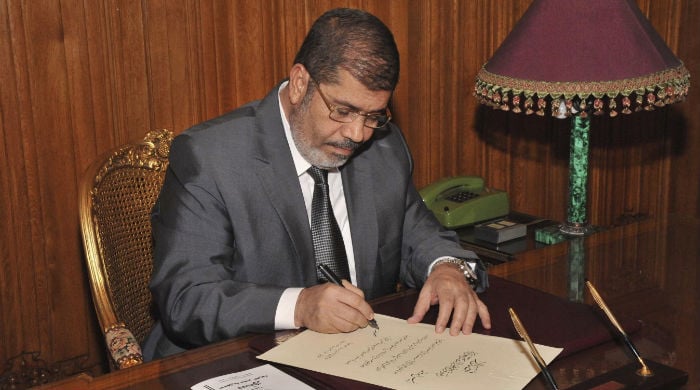 President Mohamed Mursi admitted on Wednesday that Egypt’s economy faces serious problems after he enacted a new, bitterly contested constitution that is supposed to help end political unrest and allow him to focus on the financial crisis.

The president said the economy also had great opportunities to grow, but earlier the Egyptian pound tumbled to its weakest level in almost eight years as ever more people rushed to buy dollars and withdraw their savings from banks.

Mursi, catapulted into power by his Islamist allies this year, believes that adopting the constitution quickly and holding elections to a permanent new parliament soon will help to end the long period of turmoil that has wrecked the economy.

The presidency announced on Wednesday that Mursi had formally approved the constitution, which was drafted by his Islamist allies, the previous evening, shortly after results showed that Egyptians had backed it in a referendum.

Keen to be seen as tough but fair, Mursi said it was time for all political forces to put aside their differences and start working together to bring economic stability.

“I will make all efforts, together with you, to push forward the economy which faces huge challenges and has great opportunities to grow,” Mursi said in his first address to the nation since the adoption of the constitution.

The text won about 64 per cent in a two-stage referendum, paving the way for a new parliamentary vote in about two months.

The main opposition group, which has until now boycotted all rounds of national unity talks led by Mursi’s office, said it had not changed its position.
“The ongoing talks are farcical and theatrical,” Hussein Abdel Ghani, an opposition spokesman, told reporters. He called on Egyptians to demonstrate against the new constitution on Jan. 25, the second anniversary of Egypt’s revolution.

He added that the opposition would stick to its policy of peaceful protest against Mursi’s government, which he said sought to use religion as a tool to create an oppressive state.

The referendum result marked yet another electoral victory for the Islamists since veteran autocrat Hosni Mubarak was toppled in 2011, following parliamentary elections last year and the presidential vote that brought Mursi to power this year.

The charter states that the principles of sharia, Islamic law, are the main source of legislation and that Islamic authorities will be consulted on sharia – a source of concern to the Christian minority and others.

Mursi’s government, which has accused opponents of damaging the economy by prolonging the political upheaval, now faces the tough task of building a broad consensus as it prepares to impose hugely unpopular austerity measures.

In his speech, Mursi said he would introduce incentives to make Egypt – once a darling of emerging market investors – an attractive place for business once again, and he would consider making changes in the cabinet as part of his plan.

He also appeared keen to seem tolerant of those who voted “no” in this month’s referendum.

“This is their right,” he said. “Those who said ‘no’ and those who said ‘yes’, I thank you both because we do not want to return to the era of one opinion or fake majorities.”

The atmosphere of crisis deepened this week after the Standard & Poor’s agency downgraded Egypt’s long-term credit rating and warned of a possible further cut. The government has imposed currency restrictions to reduce capital flight.

In Cairo’s bustling centre, people appeared nervous, openly expressing their frustration with economic instability as they went about their daily business.

“The country’s going to the pits. Everything is a mess,” Hamdy Hussein, a 61-year-old building janitor, said angrily. “It’s worse than ever. Mubarak was better than now. People were living and there was security.”

Ashraf Mohamed Kamal, 30, added: “The economic situation will be a mess in the next few years. It already is. People will get hungrier. People are now begging more.”

The pound traded as low as 6.1775 against the dollar on Wednesday, close to its all-time low of 6.26 hit on Oct. 14, 2004, on concerns that the government might devalue or tighten restrictions on currency movements.

“All customers are rushing to buy dollars after the downgrading,” said a dealer at a Cairo-based bank. “We’ll have to wait to see how the market will operate with the US dollar, because as you know there is a rush at the moment.”

The government is now in talks with business figures, trade unions and other groups to persuade them of the need for tax increases to resolve the crisis. Mursi has committed to such austerity measures to receive a $4.8 billion loan from the International Monetary Fund.

However, Al-Mal newspaper quoted Planning Minister Ashraf al-Araby as saying the government would not implement the tax increases until it had completed the dialogue with different parts of society.

Mursi’s government argues the constitution offers enough protection to all groups, and that many Egyptians are fed up with street protests that have prevented a return to normality.

The charter gives Egypt’s upper house of parliament, which is dominated by Islamists, full legislative powers until the vote for a new lower house is held.
Mursi is also due to address the upper house on Saturday in a speech likely to be dominated by economic policy.

Sharpening people’s concerns, the authorities imposed currency controls on Tuesday to prevent capital flight. Leaving or entering Egypt with more than $10,000 in cash is now banned.