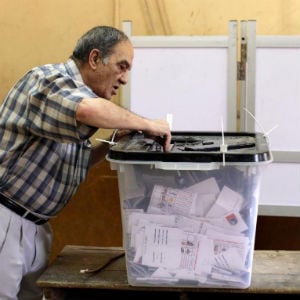 A second day of voting on Sunday will deliver Egypt’s first freely elected president, though the country faces renewed tension whether he is a former general from the old guard or an Islamist from the long-suppressed Muslim Brotherhood.

Egyptians must decide between Ahmed Shafik, the last prime minister of Hosni Mubarak, or Mohamed Morsy, a U.S.-educated engineer who spent time in Mubarak’s jails and offers Egypt a new start as an Islamic democracy.

“We have to vote because these elections are historic,” said Amr Omar, voting in Cairo, who said he was a revolutionary youth activist. “I will vote for Morsy… Even if it means electing the hypocritical Islamists, we must break the vicious cycle of Mubarak’s police state.”

A gunfight killed two in Cairo overnight, according to local media. The reports blamed a dispute between street vendors and there was no apparent connection to the vote, which saw little trouble on Saturday despite mutual accusations of fraud. Observers reported only minor and scattered breaches.

It was impossible to forecast who will emerge the winner by Monday – and whoever it is may face anger and accusations of foul play. Both men have widespread support, but many voters may be staying away, disillusioned by a choice of extremes after centrist candidates were knocked out in the first round last month.

Turnout at polling stations in several areas seemed lower on Saturday than during the first round. Polls re-opened at 8 a.m. on Sunday (0600 GMT).

“I am on my way to vote and I’ll spoil my ballot. I’ll cross out both Morsy and Shafik because neither deserve to be president,” said 40-year-old shop owner Saleh Ashour in Cairo.

The military rulers who pushed out their brother officer Mubarak 16 months ago to appease the street protests of the Arab Spring have already enraged their veteran adversaries in the Brotherhood late last week by dissolving the new parliament, elected only five months ago with a sweeping Islamist majority.

A win for Shafik, 70, who says he has learned the lessons of the revolt and offers security, prosperity and religious tolerance, may prompt Islamist claims of Mubarak-style vote-rigging and street protests by the disillusioned urban youths who made Cairo’s Tahrir Square their battleground last year.

Shafik, a former fighter pilot and air force chief whose second finish to Morsy in the first round capped a rapid ascent from rank outsider status, made little comment as he voted.