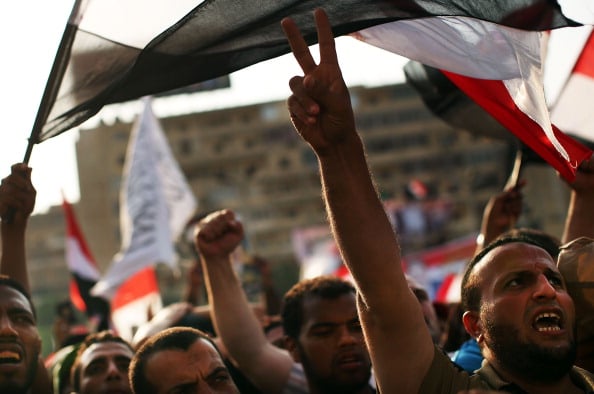 Egypt’s interim rulers issued a faster than expected timetable for elections to drag the country out of crisis, a day after 51 people were killed when troops fired on a crowd supporting ousted President Mohamed Mursi.

The streets of Cairo were quiet on Tuesday morning but Mursi’s Muslim Brotherhood movement called for more protests later in the day, raising the risk of further violence.

Under pressure to deliver a rapid timetable to restore democracy, Adli Mansour, the judge named head of state by the army when it brought down Mursi last week, decreed overnight that a parliamentary vote would be held in about six months. That would be followed by a presidential election.

The political stakes were raised by the bloodshed on Monday, the worst since Mursi was toppled by the military. The army opened fire outside Cairo’s Republican Guard barracks where the deposed leader is believed to be held.

Officials said troops fired in response to an attack by armed assailants but the protesters disputed that account, insisting they were conducting peaceful dawn prayers.

“They shot us with teargas, birdshot, rubber bullets – everything. Then they used live bullets,” said Abdelaziz Abdel Shakua, a bearded 30-year-old who was wounded in his right leg.

The bloodshed shocked Egyptians, already tired of the turbulence that began 2-1/2 years ago with the overthrow of autocrat Hosni Mubarak in a popular uprising. However, many Egyptians seemed to accept the official account that the troops had come under attack and had fired back.

“Of course I condemn this: Egyptian versus Egyptian. But the people attacked the army, not the other way around,” said Abdullah Abdel Rayal, 58, shopping in a street market in downtown Cairo on Tuesday morning.

The bloodshed has also raised alarm among key donors such as the United States and the European Union, as well as in Israel, with which Egypt has had a U.S.-backed peace treaty since 1979.

Millions of people took to the streets on June 30 to demand Mursi’s resignation, fearing he was orchestrating a creeping Islamist takeover of the state.

To the Brotherhood, his removal amounted to the reversal of democracy a year after he became Egypt’s first freely elected leader. Islamists fear a return to the suppression they endured for decades under autocratic rulers like Mubarak.

Protesters said Monday’s shooting started as they performed morning prayers outside the barracks. Military spokesman Ahmed Ali said that at 4 a.m. (0200 GMT) armed men attacked troops in the area in the northeast of the city.

At a hospital near Cairo’s Rabaa Adawiya mosque, where many of the wounded and dead were taken, rooms were crammed full, sheets were stained with blood and medics rushed to attend to those hurt.

Mustafa Shalaby, a young doctor at the hospital – one of at least three places where casualties were taken – said he counted 45 dead and more than 400 wounded.

Film broadcast by Egyptian state TV showed Mursi supporters throwing rocks at soldiers in riot gear on one of the main roads leading to Cairo airport. Young men, some carrying sticks, crouched behind a building, emerging to throw petrol bombs before retreating again.

Mansour decreed that Egypt will hold new parliamentary elections once amendments to its suspended constitution are approved in a referendum.

In what appeared to be an olive branch to Islamists, the decree included controversial language put into the constitution last year that defined the principles of Islamic sharia law.

However, critics said the plan repeated flaws in the 2011 transition that contributed to the current crisis, by leaving the process for amending the constitution vague.

Whether that will be enough to lure back the hardline Islamist Nour Party, which had supported the military-led transition plans until Monday’s attack, remains to be seen. The army is keen to win over Nour, the second biggest Islamist group after the Brotherhood, to keep the transition inclusive.

Nathan Brown, a leading expert on Egypt’s constitution at George Washington University in Washington, said that while Monday’s decree laid out a clear sequence for transition, it repeated many of the mistakes of the post-Mubarak process.

“It was drawn up by an anonymous committee; it was issued by executive fiat; the timetable is rushed; the provisions for consultation are vague; and it promises inclusiveness but gives no clear procedural guidelines for it,” he told Reuters.

The Brotherhood movement has refused to have anything to do with the process, and thousands of supporters have camped out in northeast Cairo for the last five days and vowed not to budge until Mursi returns as president – a seemingly vain hope.

The events have worried Western allies. The United States, still refraining from calling the military intervention a “coup” – a label that under U.S. law would require it to halt aid – called on Egypt’s army to exercise “maximum restraint.”

The White House said it was not about to halt aid to Egypt, including the $1.3 billion it gives the military.

The army has insisted that the overthrow was not a coup and that it was enforcing the “will of the people” after millions took to the streets on June 30 to call for Mursi’s resignation.