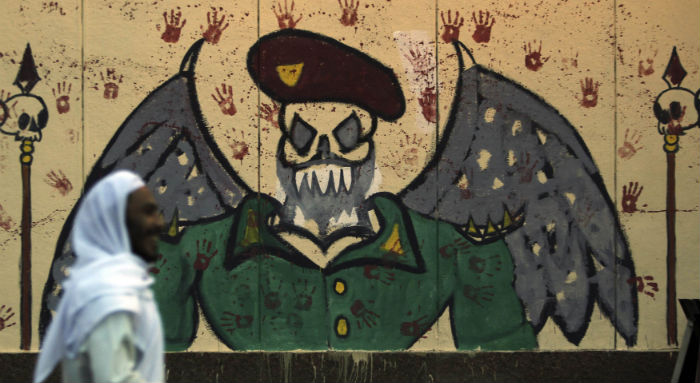 Egyptian President Mohamed Mursi has cancelled a decree that gave him sweeping powers and sparked deadly violence, but did not delay this month’s referendum on a new constitution as his opponents had demanded.

The announcement that Mursi had scrapped his Nov. 22 decree followed hours of talks on Saturday at his presidential palace, billed as a “national dialogue” but which was boycotted by his main opponents and had little credibility among protesters.

One opposition group dismissed Mursi’s efforts at appeasement as the “continuation of deception.”

His opponents have demanded Mursi scrap the vote on Dec. 15 on a constitution that was fast-tracked through an assembly led by Mursi’s Muslim Brotherhood and other Islamists. Liberals and others had walked out, saying their voices were not being heard.

Islamists have insisted the referendum should go ahead on time, saying it is needed to complete a democratic transition still incomplete after Hosni Mubarak’s overthrow 22 months ago.

The military, which had run the nation during a turbulent interim period after Mubarak fell, stepped into the crisis on Saturday to tell feuding factions that dialogue was essential to avoid “catastrophe.” But a military source said that was not a prelude to the army retaking control of Egypt or the streets.

After Saturday’s talks, the president issued a new decree in which the first article “cancels the constitutional declaration” announced on Nov. 22, the spokesman for the dialogue, Mohamed Selim al-Awa, told a news conference held around midnight.

But he said the constitutional referendum would go ahead next Saturday, adding that although those at the meeting had discussed a postponement, there were legal obstacles to taking such a step.

The political turmoil has exposed deep rifts in the nation of 83 million between Islamists, who were suppressed for decades, and their rivals, who fear religious conservatives want to squeeze out other voices and restrict social freedoms. Many Egyptian just crave stability and economic recovery.

Islamists and more liberal-minded opponents have both drawn tens of thousands of supporters to the streets in rival rallies since Mursi’s decree last month. Seven people were killed in violence around the presidential palace, which has been ringed by tanks.

The spokesman for the main opposition coalition, the National Salvation Front, which stayed away from Saturday’s talks, said his group would meet on Sunday to discuss a response to Mursi’s initiative to cancel his old decree.

But Hussein Abdel Ghani added: “My first personal impression is that it is a limited and insufficient step. We repeatedly said that among our top demands is for the referendum to be delayed.”

The April 6 movement, which helped galvanise street protests against Mubarak, said in a statement about the outcome of Saturday’s talks, “What happened is manipulation and a continuation of deception in the name of law and legitimacy.”

The new decree excluded some elements from the old decree that angered the opposition, including an article that gave Mursi broad powers to confront threats to the revolution or the nation, wording opponents said gave him arbitrary authority.

Another article in the old decree had put beyond legal challenge any decision taken by the president since he took office on June 30 and until a new parliament was elected, a step that can only happen when a new constitution is in place.

That was not repeated, but the new decree said that “constitutional declarations including this declaration” were beyond judicial review.

The new decree outlined steps for setting up an assembly to draft a new constitution should the current draft be rejected in Saturday’s referendum.

In addition, the opposition was invited to offer suggested changes to the new constitution, echoing an earlier initiative by Mursi’s administration for changes to be discussed and agreed on by political factions and put to the new parliament to approve.

Amid the violence and political bickering, the army has cast itself primarily as the neutral guarantor of the nation.

“The armed forces affirm that dialogue is the best and only way to reach consensus,” the military statement said. “The opposite of that will bring us to a dark tunnel that will result in catastrophe and that is something we will not allow.”

The army might be pushing the opposition to join the dialogue and for Mursi to do more to draw them in, said Hassan Abu Taleb of the Al Ahram Center for Political and Strategic Studies.

He discounted the chance of direct military intervention, adding, “They realise that interfering again in a situation of civil combat will squeeze them between two rocks.”

But the military seemed poised to take a more active role in security arrangements for the upcoming referendum.

A Cabinet source said the Cabinet had discussed reviving the army’s ability to make arrests if it were called upon to back up police, who are normally in charge of election security.

According to the state-run daily al-Ahram, an expanded military security role might extend to the next parliamentary election and, at the president’s discretion, even beyond that.