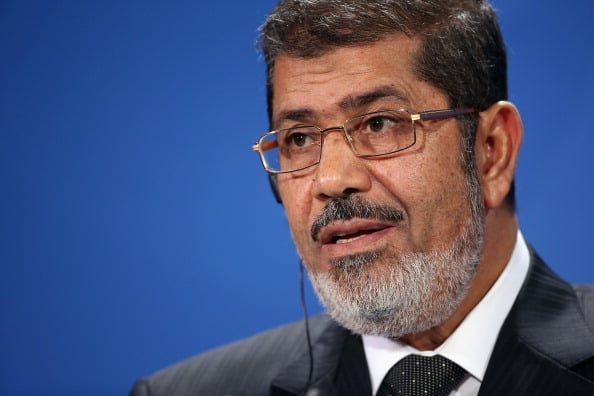 Egypt announced a criminal investigation on Saturday against deposed Islamist President Mohamed Mursi, with prosecutors saying they were examining complaints of spying, inciting violence and ruining the economy.

Egypt’s first freely elected leader has been held at an undisclosed location since the army removed him from power on July 3, but has not yet been charged with any crime. In recent days, Washington has called for him to be freed and for the authorities to stop arresting leaders of his Muslim Brotherhood.

The public prosecutor’s office said in a statement it had received complaints against Mursi, eight other named Islamist figures including the Brotherhood’s leader, Mohamed Badie, and others it did not identify.

The military says it deposed Mursi in a justified response to popular demand after millions of people demonstrated against him. The Brotherhood says it was a coup that reversed democracy.

Turmoil in the most populous Arab state has alarmed the United States and other Western donors. Egypt straddles the Suez Canal and signed a U.S.-brokered peace treaty with Israel in 1979.

Complaints such as those against Mursi are a first step in the criminal process, allowing prosecutors to begin an investigation that can lead to charges. Announcing the step was unusual: typically prosecutors wait until charges are filed.

The prosecutors did not say who had made the complaints. Egyptian law allows them to investigate complaints from police or any member of the public.

Badie and several other Brotherhood officials already face charges for inciting violence that were announced earlier this week, but few of them have been arrested.

Asked about the announcement of criminal investigations against Mursi, Badie and others, U.S. State Department spokeswoman Jen Psaki said, “I can’t speak to the specifics of this investigation, but generally speaking, we have made clear the need to follow due process, respect the rule of law, and avoid politicized arrests and investigations.”

A senior army official told Reuters the authorities were allowing the Brotherhood figures to remain at large in part so that they could monitor their activities and collect evidence against them to ensure that any case was watertight.

“We will leave them to do their talking and protests and we are sure at the end everything will be resolved smoothly and legally,” said the official, who asked not to be identified.

Brotherhood spokesman Gehad El-Haddad said the charges were absurd and that it was the authorities themselves who were responsible for inciting violence.

“They execute the crime themselves and then they slap it on their opponents. As long as you have a criminal police force and a complicit judiciary, the evidence will appear and the judge will be satisfied. And the media will sell it to the public.”

Mursi’s Brotherhood called on Saturday for more mass demonstrations after large protests broke up peacefully before dawn, ending a week in which at least 90 people were killed.

The Brotherhood, which has maintained a vigil near a Cairo mosque since before the army removed Mursi on July 3, has said it will not leave the streets until he is restored to power.

Tens of thousands turned out on Friday for what the Brotherhood called a “day of marching on”. Large crowds of supporters dispersed early on Saturday, although a few hundred marched again after nightfall towards the defence ministry.

Mursi’s opponents say these demonstrations are still much smaller than the ones that brought him down. However, the Brotherhood has shown its organisational muscle by keeping its vigil running into a third week and bringing in coachloads of supporters from the provinces during the Ramadan fasting month.

Senior Brotherhood figure Essam el-Erian, one of those who faces arrest, called on his Facebook page for more demonstrations on Monday. “Egypt decides through the ballot box, through protests, mass marches and peaceful sit-ins,” he said.

Friday’s demonstration passed off peacefully, in contrast to a week earlier when 35 people were killed in battles between pro- and anti-Mursi demonstrators.

On Monday, 57 people were killed in clashes between the army and Mursi supporters near a Cairo barracks. The army said it was responding to an attack; the Brotherhood called it a massacre.

Egypt’s interim authorities have set out a “road map” to restore full civilian rule, with plans for a new constitution and parliamentary elections in about six months, followed by a presidential vote. A judge has been named interim president and liberal economist Hazem el-Beblawi appointed prime minister.

He is trying to form a Cabinet likely to be made up mainly of technocrats and liberals, without offending a large ultra-orthodox Islamist group that broke with the Brotherhood to accept the military takeover.

By the end of Saturday, candidates for many of the key ministries had been identified, although they had yet to accept them and the decisions were not final.

Two senior interim government sources said Beblawi planned to offer the finance portfolio to Hany Kadri, a Christian who has overseen stalled loan talks with the International Monetary Fund, and the supplies ministry to Godah Abdel Khalik, a leftist politician who held the position briefly in 2011.

Another Christian, Mounir Fakhry Abdel Nour, a liberal who previously served as tourism minister, will be invited to head the investment ministry.

A former ambassador to Washington, Nabil Fahmy, will be offered the foreign ministry, while General Abdel Fattah al-Sisi, who carried out the overthrow of Mursi, will retain the defence portfolio as expected.

The United States refuses to say whether it considers the army takeover a “coup”, which under U.S. law would require it to cut off aid including $1.3 billion a year in military support.

In recent days it has described Mursi’s rule as undemocratic because of the vast popular protests against him, but also urged the authorities to release him and stop detaining his followers. Its wavering position has infuriated both sides.

Turmoil since a popular uprising toppled President Hosni Mubarak in 2011 has wrecked Egypt’s economy, scaring away tourists and investors, draining hard currency reserves and making it difficult to import food and fuel, which the government distributes at heavily subsidised prices.

Rich Gulf Arab states Saudi Arabia, the United Arab Emirates and Kuwait, happy at the overthrow of the Brotherhood, have offered Egypt $12 billion in cash, loans and fuel.

State news agency MENA said a shipment of 70,000 tonnes of diesel arrived in Alexandria on Saturday from Turkey and Sweden.