by Mary Sophia and Neil Churchill 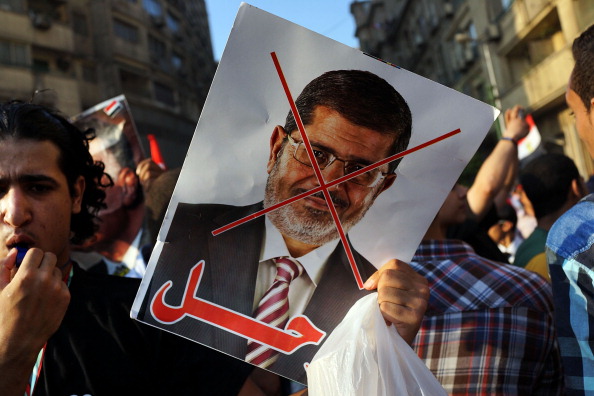 The military ousting of president Mohamed Morsi marks the end of a provocative 12 months in office for the leader of the Muslim Brotherhood party.

February 11, 2011
Mubarak concedes defeat and steps down, turning power over to the military. As per the protestors’ demands, the military dissolves parliament and suspends the constitution.

November 28, 2011 – February 15, 2012
The country holds parliamentary elections with the Muslim Brotherhood winning nearly half the seats in the lower house. The ultraconservative Salafi party takes a quarter. Islamists take nearly 90 per cent of the upper house, which is largely powerless.

May 23 – 24, 2012
The first round of voting in presidential elections take place with Mohamed Morsi and Ahmed Shafiq emerging as the two top finishers from 13 candidates.

June 16-17, 2012
Egyptian voters go to the polls in the country’s first ever democratic elections. Morsi wins with 51.7 per cent of the vote.

June 30, 2012
Mohamed Morsi takes his oath of office and becomes president of Egypt.

August 12, 2012
One of Morsi’s first moves is to retire the military’s top brass, many of whom held their positions under previous president Hosni Mubarak.

November 19, 2012
Representatives from Egypt’s churches and members of liberal parties – which make up a minority of the lower house – withdraw from the assembly in charge of writing the constitution, after accusing Islamists of ‘imposing their will’.

November 22, 2012
President Morsi declares greater powers for himself, giving his decrees immunity from judicial reviews. He also bars the courts from dissolving the assembly. The announcement sparks days of protests.

December 4, 2012
Over 100,000 Egyptians march on to the presidential palace, demanding the cancellation of a referendum set for December 15, and calling for a new constitution.

December 15, 2012
While turnout for the referendum is low, Egyptians approve the constitution with 63.8 per cent voting in favour.

December 29, 2012
Egypt’s Central Bank attempts to stop a sharp slide in the value of the Egyptian pound after foreign reserves fall to a critical low.

January 25, 2013
Hundreds of thousands of protestors take to the streets on the two-year anniversary of the revolt against Hosni Mubarak, this time in protest at current incumbent Morsi.

April 7, 2013
Pope Tawadros II publically blames Morsi for failing to protect a cathedral of the Coptic Orthodox Church as it comes under attack after Christians there hold a funeral for four members killed in protests the day before.

May 7, 2013
Morsi reshuffles his cabinet which commentators view as a move to finalise stalled negotiations with the International Monetary Fund for a loan worth $4.8 billion.

June 30, 2013
Millions of protestors fill Tahrir Square on the one-year anniversary of Morsi’s time in power, calling for him to resign. Eight people are killed in clashes outside the Muslim Brotherhood’s offices.

July 1, 2013
Demonstrations continue for a second day causing the Egyptian military to order a 48-hour ultimatum to the political parties to resolve their disputes.

July 3, 2013
The deadline passes and the military ousts president Mohamed Morsi from office. Chief of the armed forces, General Abdel Fattah al-Sisi, enforces plans to replace Morsi with an interim administration and suspends the constitution. He also calls for elections within a year.

Adli Mansour, the top judge of Egypt’s Constitutional Court, is sworn in as interim leader.