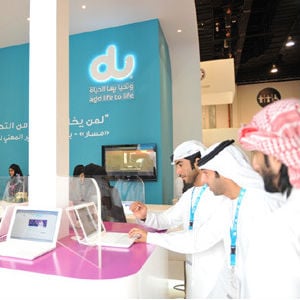 UAE telecoms operator du reported a net income of Dh1.01 billion for 2011, down from Dhs1.31 billion in 2010 mainly because of increasing royalty fees, it said on Tuesday. Royalty payments reached Dhs714.6 million last year, compared to Dhs184 million in the previous year, du said in a statement. Net profits before royalty increased by 47.8 per cent year-on-year to Dhs1.8 billion in 2011, it added.

Du’s board is proposing a dividend of Dhs0.15 per share for 2011. “The decision to pay dividends celebrates the position we have built in the market,” Ahmad Bin Byat, du’s chairman said in the statement.

“We believe this dividend proposal is an important step forward in shareholder value creation and sets the right basis for future dividend growth,” he added.

“By the end of 2011 we served more than 46 per cent of the UAE mobile market according to the Telecommunications Regulatory Authority, an enviable achievement in just five years,” Byat said.