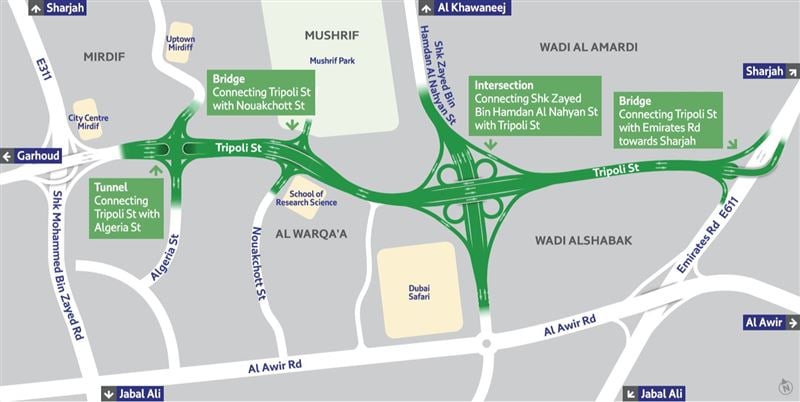 Dubai’s Roads and Transport Authority (RTA) announced on Saturday that improvement works on Tripoli Street are now 60 per cent complete.

The project will introduce a 12km parallel road to Airport Street linking Sheikh Mohammed bin Zayed Road and Emirates Road and is being sped up under UAE Vice President and Prime Minister and Dubai Ruler Sheikh Mohammed bin Rashid Al Maktoum’s instructions to fast-track the five-year roads and transport plan.

The RTA said it would increase the capacity for vehicles on the route to 6,000 per hour in both directions and ease traffic flow by 30 per cent.

Several interchanges are also being developed across different junctions and the Tripoli- Sheikh Zayed bin Hamdan Street intersection will be made into a flyover to improve traffic flow.

“Work is progressing well and the completion rate has exceeded 90 per cent in the extension of Tripoli St. (from Sheikh Zayed bin Hamdan Al Nahyan St. to Emirates Road),” said RTA director general and chairman of the RTA Mattar Al Tayer.