Dubai’s Roads and Transport Authority (RTA) has announced that several traffic diversions will be undertaken on both sides of Sheikh Zayed Road from Friday, March 10.

The diversions, between Interchanges 2 and 3, are being undertaken to complete works on roads and bridges that form part of the Al Wasl street improvements project, a statement said.

They cover Umm Al-Sheef Street, Latifa bint Hamdan Street and Al-Zomorrud Street, and will remain in place from March 2017 until July 2018.

Alternative roads will be provided for motorists during the time period, the RTA added.

“Phase II will start on Friday, March 10, by closing the existing roundabout, along with the service road parallel to the Sheikh Zayed Road (seaside),” he said.

“The alternative will be to use the two temporary roundabouts for entering and exiting Sheikh Zayed Road in order to ensure a smooth traffic flow for residents on both sides of the road during the project construction period.” 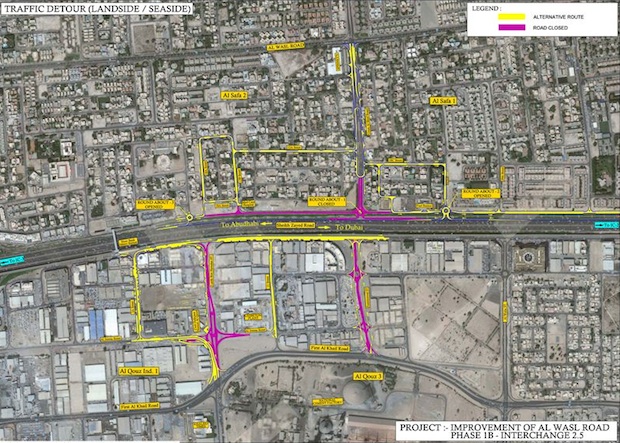 Traffic diversions on the mainland side of Sheikh Zayed Road will start on Friday, March 24, and include part of Latifa bint Hamdan Street, which will become a one-way street.

“The alternative route for motorists coming from First Al Khail Street is to head west, turn left to Al-Jarena Street and then move all the way to Street No. 3A. A u-turn will replace the existing roundabout on Al-Zomorrud Street together with entries and exits on both streets,” said Saleh.

“Such bridges will considerably ease the traffic flow on Sheikh Zayed Road, and significantly save time and effort of road users,” he added.

The official also called upon road users to follow the directional signs for alternative routes, and adhere to the speed limits displayed.