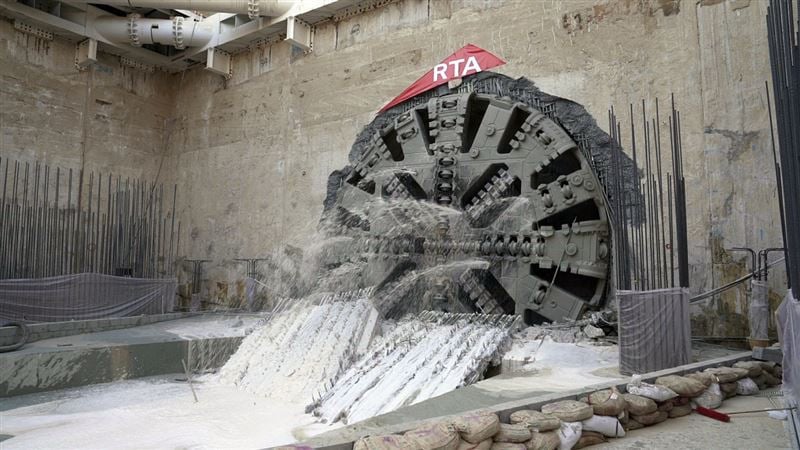 Key tunnelling works of the Dubai Metro’s Route 2020 project have been completed, the Roads and Transport Authority (RTA) has announced.

“The drilling works then continued past the Dubai Investment Park, and up to the final point at the Green Community,” he added.

Al Wugeisha can crush stones and penetrate through sandy layers or any soil components encountered during the drilling process. It has a huge metal gear supported by an automated tail. At the front, it has a cutting wheel with a cavity the shape of which varies according to the type of drilling and soil layers. The single concrete ring has six to seven molds, each ring measures about 1.5m in diameter.

The machine is also “environment-friendly and has no negative effects on land layers nearby the drilling area”, said Al Tayer.

“Moreover, the tunnels it produces have symmetrical dimensions, which facilitates construction works and reduces the expenses of tunnel wall installation,” he added.

When completed, the 15km route will link the Nakheel Harbour and Tower station on the metro’s Red Line to the Expo 2020 site, passing through areas including Discovery Gardens, Furjan, Jumeirah Golf Estates and Dubai Investment Park.

Around 3.2km of track between Discovery Gardens and Green Community will be underground, with the remaining 11.8km overground.

Of the seven stations, three will be elevated and two underground. The line will be served by 15 trains.

Overall, the RTA confirmed that works in the metro viaducts are set for completion in November this year, and all railway works of the project will be completed in July 2019.

The trial run of the metro will start in February 2020.