Meanwhile Dubai’s active ‘daytime population’ is more than a million higher, at 4,291,400, the DSC said. That includes people who are in the city but do not reside in it.

The total active population in the third quarter of 2018 increased 7.7 per cent from the same period in 2017.

DSC said that the net increase in the number of temporary residents in Dubai in the third quarter of 2018 was 6.6 per cent compared to the same period in 2017.

Meanwhile, the increase in the total resident population stands at 1.1 per cent.

Al Mehairi attributed the growth in population to Dubai’s appeal as an ‘international commercial hub that attracts people from across the world’. 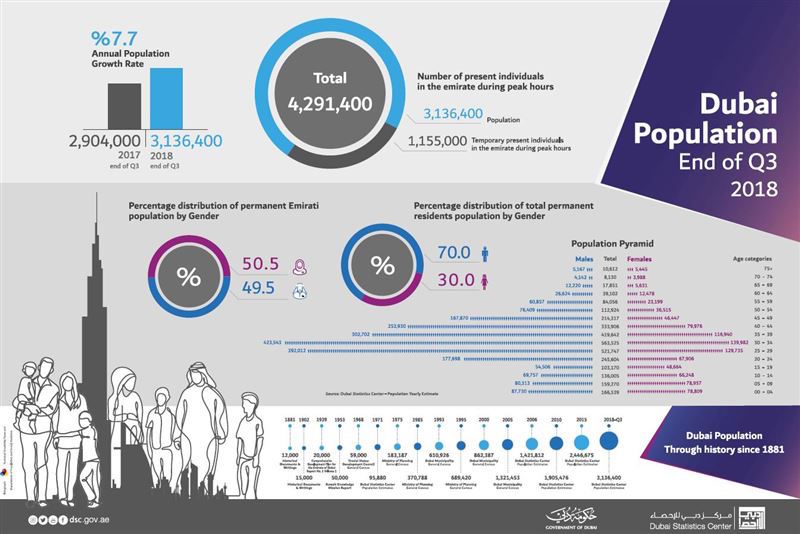 The latest population data from DSC also shows that males constitute 49.5 per cent of the Emirati population while females account for 50.5 per cent (89 males to 100 females).

The vastly higher proportion of males in Dubai’s population (233 males to 100 females) is attributed to the fact that a majority of expatriate workers are males who live in Dubai without their families.

The data also showed that the 20-44 age group accounts for 66.45 per cent of the population.

“Data of both the resident and transient population of Dubai is crucial to identify infrastructural, social and economic needs. It is necessary to provide planners, decision-makers and investors an integrated and holistic picture of the demographic realities and movement of people within the emirate,” he added.