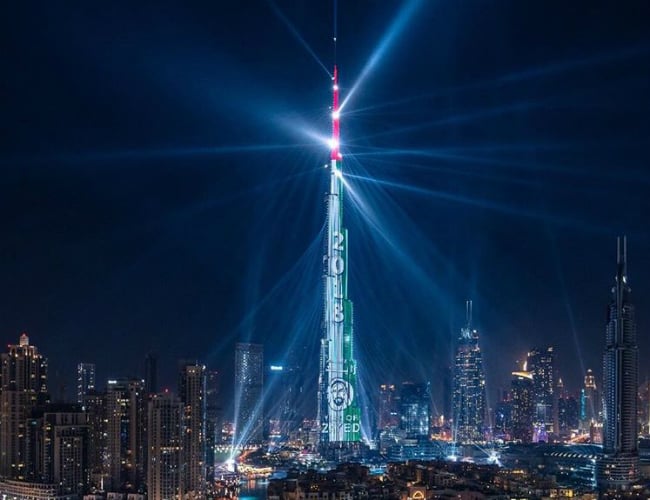 A record-breaking New Year’s Eve light show encompassing the world’s tallest building, the Burj Khalifa, will be repeated each night this week, it has been announced.

Authorities confirmed the Guinness World Record attempt in December amid wider speculation the Downtown Dubai area would not host its usual fireworks display.

This proved to be correct on the evening of December 31 and into January 1, with the Burj Khalifa and nearby structures producing an impressive display of light and sound prepared by 300 experts and 80 musicians over five months.

Downtown developer Emaar said in the days before the display the change was due to safety concerns and part of efforts to shake up proceedings.

With the largest light & sound show on a single building, this is how we lit up 2018 in Downtown Dubai and broke a new world record! #MyDubaiNewYear ? #BurjKhalifa pic.twitter.com/bwerjfsTcc

Following the successful New Year’s show, the official Twitter account of Downtown Dubai said on Monday that those who missed out would be able to catch repeat displays until January 6.

The first of these took place on Monday night at 10pm, with follow-ups happening on Tuesday and Wednesday at 8pm and Thursday, Friday and Saturday at 10pm.

For everyone to be able to enjoy the full Guinness World Record-breaking #LightUp2018 experience, we will be featuring the full show as scheduled below until Saturday, January 6:
•Monday @ 10:00 PM
•Tuesday & Wednesday @ 8:00 PM
•Thursday & Friday & Saturday @ 10:00 PM pic.twitter.com/2JUofaKcTn