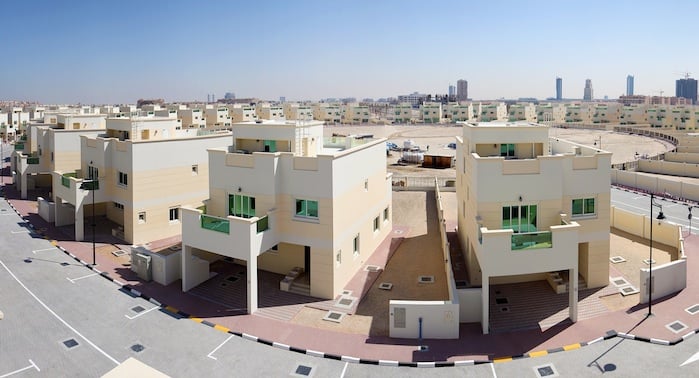 Dubai developer Nakheel announced that it has delivered 90 new villas at its Jumeirah Village Circle (JVC) project in Dubai, with construction complete and the first residents expected to move in next month.

The JVC villas project, launched in December 2013, sold out for a combined value of Dhs275 million. It consists of 90 four-bedroom villas, each covering 3,655 sqft, built in a circular pattern at the centre of JVC master community.

Landscaping work is underway, Nakheel said in a statement.

The JVC development is spread across around 570 hectares, and is expected to house over 250,000 people when complete.

The villas project is among other Nakheel-constructed developments within JVC, including 615 villas and townhouses which were delivered in 2013.

Nakheel is also developing the one million sqft Circle Mall, which is due for completion in 2017, and setting up 28 landscaped parks within JVC.

Two parks are complete, with landscaping and design work underway on the rest, the statement said.

The developer also said it has completed all infrastructure, including roads and streetlights and handed over plots to third party developers.

Almost 100 third party developers’ buildings are already complete at the community, with another 320 at various stages of design and construction, Nakheel confirmed.

The company added that third party developers will construct their individual projects to their own timelines.

In September last year, Park Investments, a newly formed real estate investment firm in the UAE, announced the launch of Park Villas, a residential project worth Dhs270 million within JVC.

The residential development spans a total area of 365,000 square feet and will comprise 93 four bedroom villas spread across two floors and equipped with a personal elevator.

The project is scheduled to be completed by the first quarter of 2016.

Located on the periphery of the community, adjacent to the Els Club Golf Course at Dubai Sports City, Reef Towers will comprise of 378 units, and seven retail outlets.