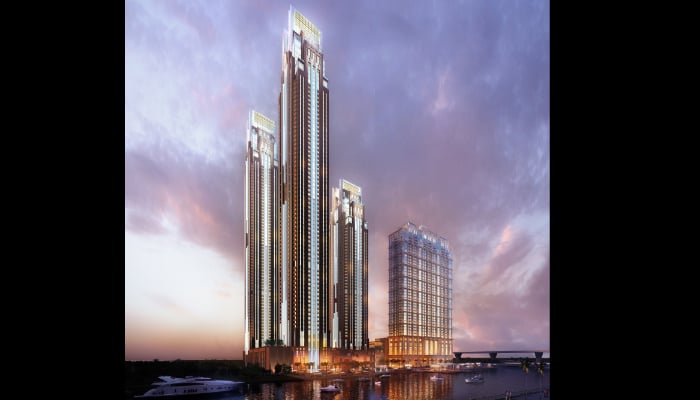 The residential towers will comprise 1,460 luxury apartments and 11 penthouses, including two VIP penthouses over a four-storey podium.

When completed, the overall integrated complex will include over 3,000 hotel and residential units, a permanent water-themed production designed by Franco Dragone, a tennis academy and club house and a classical French-style landscaped garden.

Located on the banks of the Dubai Water Canal project, the development is expected to attract 20,000 visitors every day and up to 7.3 million visitors a year, the company said in a statement.

The development is slated for completion around the same time as the Dhs2 billion canal project, which is scheduled to open in 2017.

“The 10 million square foot development, erected on approximately a one million square foot plot, will feature three world-class hotel brands – including the first-ever St. Regis in Dubai. Plus, it will have the added attraction of spectacular entertainment.”

The residential blocks will be developed by British architects WS Atkins, Knight Frank will provide retail consultancy expertise and Asteco will manage and lease the towers and retail outlets.

Facilities within the complex include swimming pools, a gym, a spa, shops, cafés, a supermarket, a crèche and a clinic.

The project’s two VIP penthouses, each spread across four levels – 72 to 74, will have seven bedrooms, garden terraces, a swimming pool and a jacuzzi. The two top floors will provide residents with a private entertainment area and an open-plan sky lounge surrounded by glass, offering a 360 degree view of Dubai.

Al Habtoor said: “We don’t have plans to sell the VIP penthouses, but if we did put them on the market, we would not sell any of them for less than $250 million each (Dhs900 million).”