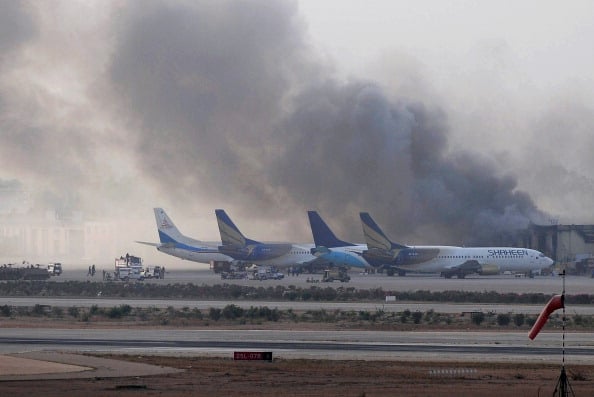 UAE carriers Emirates and Etihad have confirmed that flights on the Karachi route will face delays following a terrorist attack on the Pakistani city’s airport on Sunday.

An Emirates spokesperson said: “The closure of the airport will affect other Emirates services on this route and passengers are reminded to check on www.emirates.com for flight status updates. Emirates apologises for the inconvenience caused. The safety of our passengers and crew is of utmost importance and will not be compromised.”

At least 27 people including 10 militants were killed after a group of Taliban fighters attacked the Jinnah International Airport on Sunday.

The Pakistani Taliban said they carried out the attack on the airport in retaliation to air strikes in their strongholds near the Afghan border.

A spokesperson said: “We will continue to monitor the security situation in Karachi. All affected Etihad Airways’ passengers are being kept fully informed about the situation. Passengers currently in transit at our hub in Abu Dhabi are being provided with hotel accommodation and lounge access.

“We apologise for the delay, however, the safety of passengers and airline staff is of paramount importance to Etihad Airways.”

The attack, which took place on Sunday night, lasted for around six hours. Two international flights, operated by Emirates and Thai Airways, were boarding passengers at that time.

However Emirates has confirmed that all passengers onboard its flight are safe.

“Due to the closure of Jinnah International Airport in Karachi on Sunday June 8, EK603, the Karachi to Dubai service, was cancelled. Under the guidance of the Pakistan Military, the passengers and crew disembarked the aircraft and were taken to a secure area of the terminal.

“When the airport reopens all passengers will be rebooked on to alternate Emirates flights to continue their journey,” a statement said.