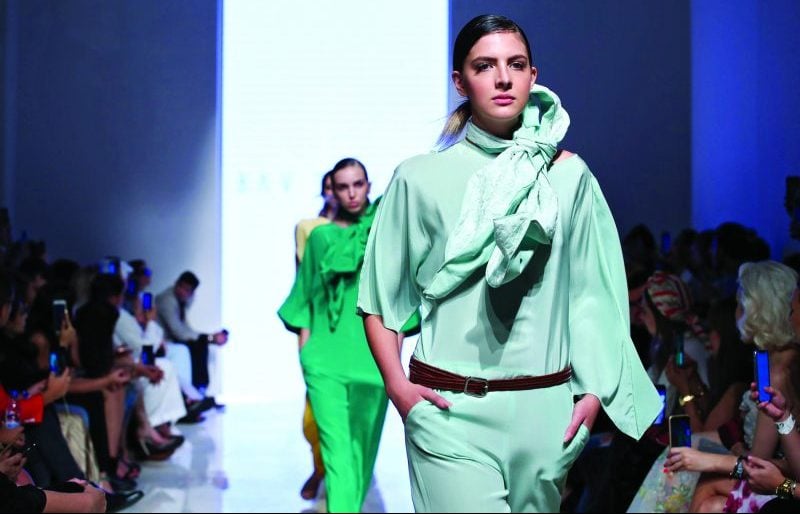 The numbers speak for themselves. But in case anyone is unaware: fashion is big business in the UAE. How big are we talking? Try more than $12bn (Dhs44.1bn) per year – that’s according to a report from the Dubai Chamber of Commerce, which reveals clothing sales amounted to about $12.3bn (Dhs45.2bn) in the UAE in 2018.

The financial opportunities are one reason why more international designers are coming to the UAE. That was evident at the most recent Arab Fashion Week (AFW) in October, when more than 40 international and regional designers descended on Dubai to showcase their latest collections – a new record for the event.

Among those was Moldovan designer Lilia Bezer. The co-founder and creative director of the label Malliny (which she founded in 2015 with her daughter Marinela), Bezer – whose couture gowns have been featured in the likes of British Vogue, and who has shown at Paris Fashion Week – was showing for the third year in a row, an 18-piece collection in blues, greens, pinks, purples, black, gold and silver. She says the reason she keeps coming back to do runway shows in the Gulf is simple.

“In the last 20 years in the Gulf region, almost all the projects – including hotels, restaurants, stores or buildings – begin with “the most…’ in the world,” she explains.

“The demands and standards of the fashion industry, as well, have to be the best. Malliny dresses are made for customers with an income from medium to high, because of their unique luxurious style, most of them being created just in one sample. This is why we believe Dubai is for Malliny, and vice-versa.” 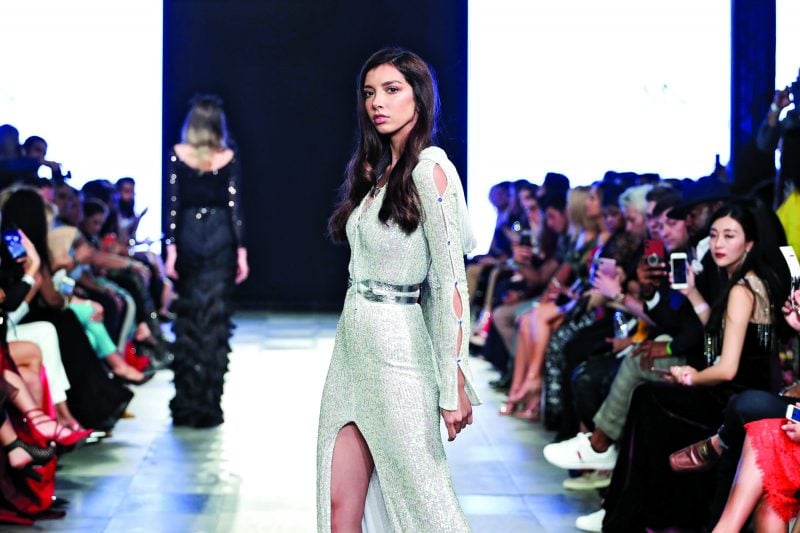 There are certainly numbers to back Bezer up. The same Dubai Chamber of Commerce report predicts apparel sales in the UAE could be worth as much as $15bn (Dhs55.1bn) per year by 2023, with womenswear (which was what designers at AFW were showcasing) sales expected to be a key driver of that growth, rising at a rate of about 5 per cent per year (from about $4.2bn per year in 2019 to $5.2bn per year by 2023).

That growth is also why Turkish designers Ezra and Tuba Cetin brought their ezratuba label to AFW for the second year in a row. The pair also makes a bold claim as to what the apparel industry’s increasing clout in Dubai will mean for the region’s economy and international profile.

“Dubai is a rapidly growing fashion economy, where consumerism is on the rise,” they explain.

“We think that Arab Fashion Week can compete with international fashion weeks in Paris, London, [Milan] and New York because they have a unique concept. Dubai will be the fifth fashion week in the world.”

The duo expands on the claim.

“The Middle East is full of surprises. When discussing designer brands and the latest fashion trends, what comes to mind are cities like Paris, Milan, and New York. Never have the fashion public known that with baby steps, the Middle East has become the birthplace of the hottest new trends in town. When it comes to this region’s fashion for women, the first thing that comes to mind is trendy women. Fashion designers from the region are now making waves in the industry. Elie Saab, Zuhair Murad, Georges Chakra and Georges Hobeika have been getting popular lately.”

They add: “The consumer is coming out to buy more and look for diversification. While the rest of the world’s understanding of fashion in the UAE region has always been a strong focus on evening wear, there is a huge shift to a more contemporary market nowadays. During our time in Dubai, we have understood that Dubai is the new star.”

But, perhaps most importantly for the bottom lines of apparel brands and couture designers: “While fashion for women has been changing in the Middle East recently, Arab women still go for luxury.”

The overall luxury market in the UAE is booming and is projected to reach $14.9bn in the next five years, recording a CAGR of more than 7.4 per cent between 2018-2023, according to data firm Research and Markets.

In other words: there’s a rather large pile of money designers can potentially profit from in the UAE – a pile that’s only expected to get quite a bit bigger.

Adding to the evidence that there’s already serious money to be made from fashion in the UAE, AFW was the first major event in the region to have introduced the “see now, buy now” concept on the runway, allowing show attendees to buy looks six months in advance of when designs seen on runways normally become available. The concept was back this season with traditional trunk shows enabling buyers to attend a private show in an exclusive salon environment with the designers – and this time was run in partnership with Emirates NBD bank, allowing the bank’s clients to convert loyalty points into “fashion coins” to purchase pieces from the runway collection.

Mohammed Aqra, head of partnership for the Arab Fashion Council, which put on AFW says: “We don’t sit and watch, but we create the desire. Together with our multinational partners, we create the need for the luxury market.”

Jacob Abrian, founder and CEO of the Arab Fashion Council adds: “Arab Fashion Week is a powerful entertainment tool that touches the economic growth in the region.”

Another international designer showing at the most recent AFW was Bav Tailor.

Describing herself as “enchanted” by Arab culture, Tailor, from the UK, says showing in Dubai appealed because of just how much it’s changing.
The future outlook for the region also shows promise, she opines.

“The Middle East will become a true major hub for fashion. There is already so much inspiration taken from Arab culture which you see on the catwalks in Paris, Milan, London and New York. Not only is the Middle East a source of inspiration, but a source for new horizons in showcasing fashion,” she says.

Revealed: The value of retail fashion in the UAE