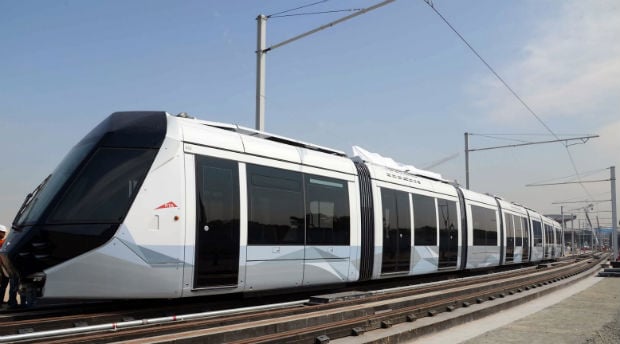 Dubai Tram will officially launch on Tuesday evening, November 11, beginning passenger services on Wednesday at 6.30 am, the Roads and Transport Authority (RTA) said.

The project will be inaugrated by Sheikh Mohammed bin Rashid Al Maktoum, vice president and the prime minister of the UAE, who will embark on the tram’s maiden run along with other senior RTA officials.

The first phase of the tram, opening today, will stretch 10.6 kilometres with 11 stations covering major residential and commercial areas between Dubai Marina and Al Sufouh.

Dubai Tram is the first tram outside Europe powered by ground-based electric cables extending throughout the tramway, avoiding the need for hanging cables, and the first tram in the world to utilise platform screen doors, which synchronise with the opening and closing of the tram doors to provide additional safety to riders.

The project is also the first tram to offer air-conditioned stations and different cabin classes, integrating the same gold, silver and women & children carriage system as the Dubai Metro.

“The Dubai Tram is a brainchild of His Highness Sheikh Mohammed bin Rashid Al Maktoum, vice-president and prime minister of the UAE and Ruler of Dubai, to provide an advanced transit system that serves the JBR, Marina and Sufouh,” said Mattar Al Tayer, chairman of the board and executive director of the RTA.

“At the establishment of the RTA in 2005, His Highness directed to thrash out integrated and comprehensive solutions for the area in order to accommodate the huge urbanisation projects in the neighborhood, particularly the JBR and the Marina.”

Al Tayer added that the decision to start a tram service was made after the RTA conducted a comprehensive study, which revealed that the area needs massive improvement in its road network and a mass transit system linking the Dubai Metro and the Monorail on the Palm Jumeirah.

The second stage of the Dubai Tram will extend 14.6 km along Sufouh Street, RTA added, though it did not specify a start date.

The tram fleet comprises 11 trams in the initial stage, with 14 trams to be added in the second stage, bringing total to 25 trams.

“The tram aims to improve the mobility within Dubai in general and areas of tourist and economic importance served by the tramway in particular,” said Al Tayer.

“It also contributes to boosting the integrated public transport systems in the emirate, providing a smooth, handy and highly efficient transit experience within communities characterised by business and tourist importance in the city of Dubai.

“It also enhances the business, trade and tourism structures as well as the economic base of the emirate, besides minimising carbon emissions, sustaining the environment, and improving the living environment of residents,” he added.