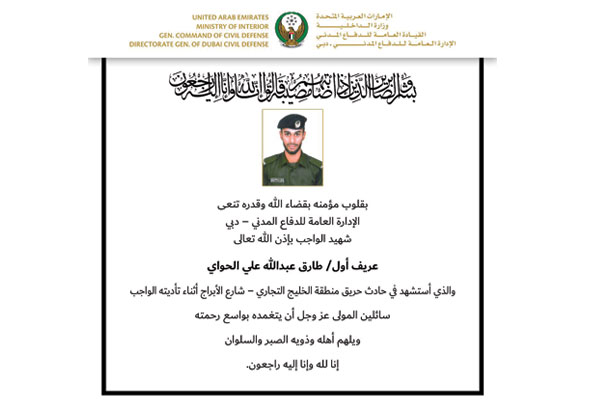 At 10.40am, the Dubai Civil Defence were notified of the fire and its teams from Al-Quoz, Etihad and Zabeel rushed to the site to contain the fire.

While there were no civilian casualties reported, one firefighter was killed in the blaze.

In a tweet, Dubai Civil Defence acknowledged that one of its officers dies while attempting to put out the fire. “Corporal Tariq Abdullah Ali Al Hawai from Etihad (Union) Firefighting Centre has died while trying to control the fire that broke out… at an under-construction building located on Al Abraj Street.”

The fire is believed to have begun in the parking floor of the building, though the exact cause hasn’t yet been revealed. The fire was quickly bought under control.

Last year, the Civil Defence revealed plans to reduce its response time to 30 seconds in key areas of the city.

The project involved authorised personnel taking actions on emergencies through real-time analytics transmissions and technology and devices that provide images and data to an operations room.

The current response time to fires is six-to-eight minutes for 80 per cent of incidents reported.

Fire breaks out at Al Quoz warehouse in Dubai