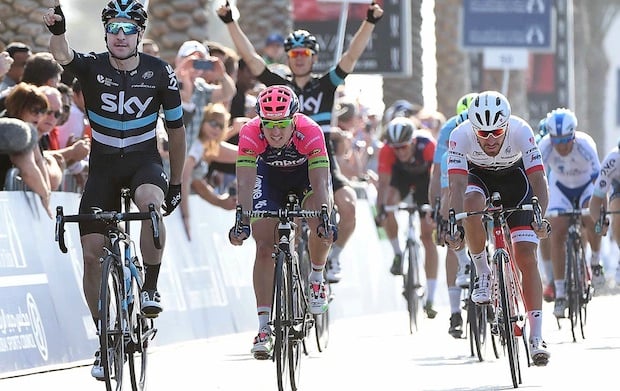 Dubai’s Roads and Transport Authority (RTA) has said that cycling event Dubai Tour 2017, which begins on Tuesday, will have a minimal impact on road traffic.

The fourth edition of the event, which runs from January 31- February 4, will see 16 teams competing in five stages over a combined distance of 865km.

The tour starts from Dubai and runs across all the six emirates of the UAE.

Maitha bin Adai, CEO of RTA’s Traffic and Roads Agency, said: “Necessary arrangements are in place to manage the traffic movement in coordination with tour organisers. The tour will not last more than 10 minutes on every part of the impacted streets, following which the traffic will be restored back to normal.

“The main signalised junctions will be programmed according to the planned stages and announced timings.”

The RTA is coordinating with the Dubai Police, UAE Cycling Federation and Dubai Sports Council to ensure safety of the participants, she said.

Bin Adai also urged road users to cooperate with the bodies concerned and adhere to the traffic instructions and directional signage set for streamlining traffic movement across Dubai over the five days of the tour.

In Dubai, the tour will cross through the following streets between 10.30am and 3.30 pm over the next five days- 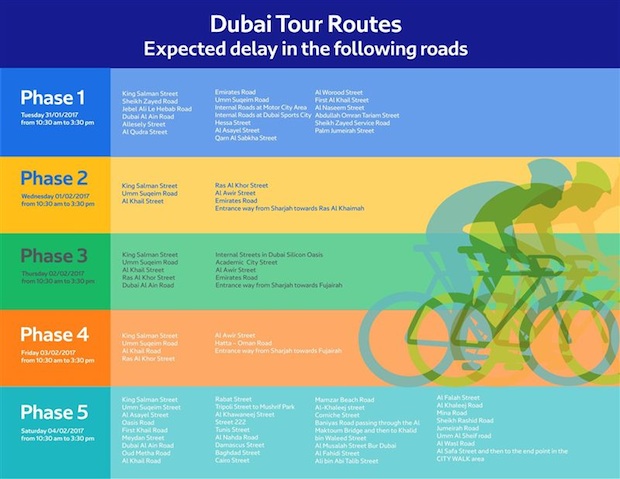 The first stage of Dubai Tour starts on Tuesday from Dubai International Marine Sports Club at King Salman bin Abdul Aziz Street up to to Palm Jumeirah for a distance of about 181km.

The second stage starts on Wednesday from Dubai International Marine Sports Club at King Salman bin Abdul Aziz Street and heads towards Ras Al Khaimah over a distance of 187km.

The fourth stage starts on Friday morning from Dubai International Marine Sports Club at King Salman bin Abdul Aziz Street and heads to Hatta over a distance of 172km.

It passes by Umm Suqeim Street, Al Khail Street, Ras Al Khor Street, Aweer Street and Hatta-Oman Street towards the emirates of Sharjah and Fujairah and down to Hatta.

The fifth and final stage begins on Saturday from Dubai International Marine Sports Club at King Salman bin Abdul Aziz Street to City Walk over a distance of 127km.