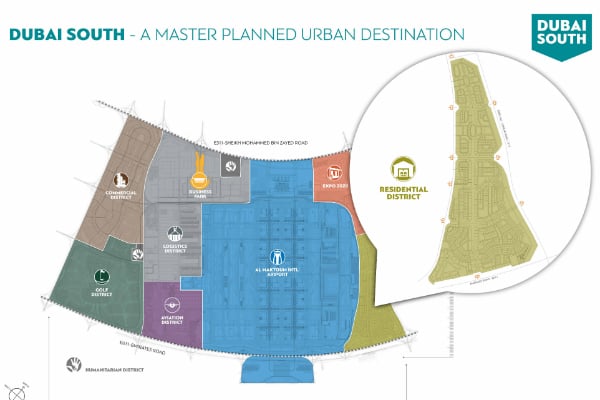 Dubai South, a mixed-use master development connected to the city’s Expo 2020 site and southern airport, has awarded Dhs 1bn ($272m) of contracts for its residential district and other projects.

The district, which includes schools, nurseries, hospitals, retail outlets, F&B options, a post office, swimming academy and a sports centre, has been designed to house 35,000 residents in 10,000 units of villas, apartments and townhouses.

Infrastructure work is being conducted by the UAE’s Al Nasr, which is expected to complete the first section in the fourth quarter of 2016. The remaining infrastructure work in the first phase has been awarded to Tristar Engineering & Construction and is scheduled to be completed by Q4 of 2017.

This infrastructure will then be used by more than 40 developers to complete their projects in the district, Dubai South said.

Atkins Global, Studio International Architects and RNL Design have been awarded contracts to oversee the master plan and product design for the mixed development within the residential district, including apartments, townhouses, schools, community facilities, entertainment, retail and hospitality options.

Elsewhere, Al Nasr was selected to construct infrastructure in the Dubai South logistics district and Parsons and Kele Constructions were awarded contracts to build the first phase of the Sakany Staff Village, designed to house 20,000 residents by 2020.

“Our investments will take us closer to realising Dubai’s vision of becoming a city of happy, creative, and empowered people,” said Dubai South acting chief executive Ahmed Al Ansari.“The concept behind the residential district is rooted in the overarching societal themes of Dubai Plan 2021. Dubai South is reinventing the urban ecosystem by creating a city that is based primarily on the happiness and wellbeing of people.”

Further details of the projects will be unveiled at the October Cityscape Global conference in September, according to the developer.

Last year the developer revealed the Dhs 25bn The Villages concept comprising clusters of residential buildings centred around a community core of amenities.