Dubai has chalked up a brace of new Guinness world records – the largest football mosaic of the UAE flag and tallest structure in chocolate – to coincide with the UAE’s 43rd National Day.

Commemorative footballs and t-shirts were sold to the audience, with proceeds going to the ‘Seeing is Believing’ initiative, Standard Chartered’s global programme that tackles avoidable blindness and visual impairment. 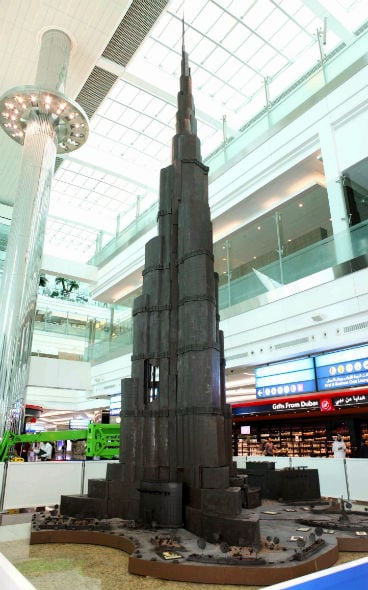 The chocolate tower, made using 4,200kgs of high quality Belgian chocolate, took Farrugia and his team of 1,050 hours to complete. The tower is located at Concourse A in Terminal 3 and will be on display for two weeks.

“We thought it was a great idea to celebrate the National Day with a record breaking feat that travellers passing through Dubai International would be able to appreciate,” said Anita Mehra, vice president of Communications & Business Development.

A Maltese artist who specialises in food art, Farrugia has been working in the field of pastry and baking for 32 years.

He has participated in many international culinary competitions in London, Malta and Egypt wining top honours in chocolate sculptures.