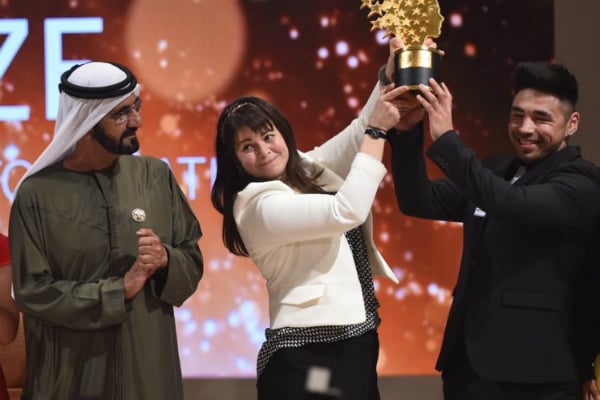 Canadian teacher Maggie McDonnell has been awarded the prestigious $1m Global Teacher Prize at a ceremony in Dubai for her work with students in a remote Inuit village.

McDonnell was presented the award by HH Sheikh Mohammed bin Rashid Al Maktoum, UAE Vice President and Prime Minister, and Ruler of Dubai for her work in Salluit, a village deep in the Canadian Arctic that is only accessible by air.

During her six years at Ikusik School, she was credited with creating a life skills programme that improved registration for girls by 500 per cent and for encouraging pupils to work in a community kitchen.

She is also a temporary foster parent to children in the area and has attended suicide prevention training in a town known for its high staff turnover and challenging conditions, with temperature lows of -25C.

In 2015, Salluit alone saw six suicides among men aged 18 to 25 in a total population of 1,300 and
teenagers in the area often resort to drink, drugs and self harm due to deprivation and isolation.

Canadian Prime Minister Justin Trudeau sent McDonnell a congratulatory video message and in an acceptance speech she said she wanted to share the award with her students.

“I would like to say thank you to every teacher out there. Teachers owe responsibilities to many people – to students, to parents, to the community and the school board.

“But in the end, as all great teachers know, they are ultimately responsible to something far greater. They are responsible to the future and for the world that will be shaped by the children they teach.”

McDonnell plans to use the $1m prize money to start an NGO.

The Global Teacher prize was setup by the founder of GEMS Education and the Varkey Foundation Sunny Varkey, who said he hoped the story of McDonnell would inspire others looking to enter the teaching profession.