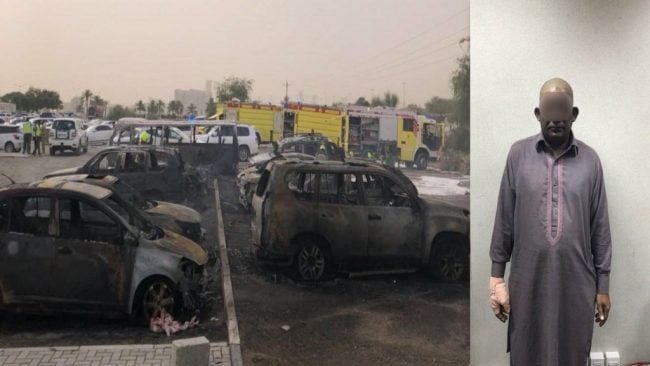 Dubai Police have arrested an Asian man accused of setting 11 vehicles on fire outside Dubai’s Outlet Mall at 4:00pm on Saturday.

Commander-in-chief major general Abdullah Khalifa Al Merri praised the efforts of the Criminal Investigation Department for the speed of the arrest.

Foul play was suspected given that the fire started in a safe place with no burning or incendiary material in the surrounding area.

The man was apprehended at his residence before he could flee the country. He was found to have burn injuries from the fire.

Dubai Police said he was working as a driver transferring workers to the Outlet Mall and got into an argument with another drive of the same nationality. The fire was started in retaliation.

“The accused was then referred to the competent authorities to complete the legal proceedings,” Dubai Police said in a Facebook post.

Authorities dealt with a fire of a different nature on Sunday when a tower block in Dubai Marina went up in flames.

No injuries were reported and the fire was put out safely after 45 minutes.