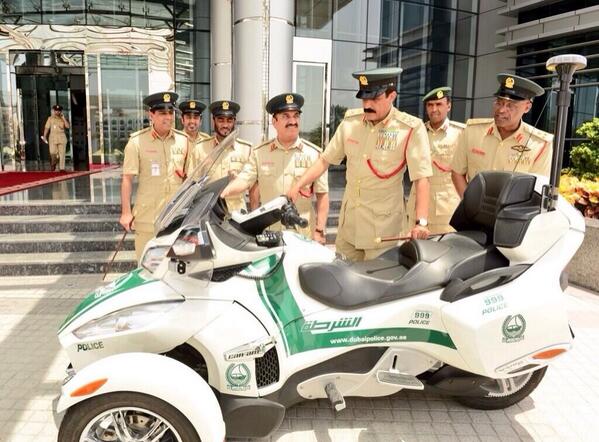 Dubai Police has added a new superbike, a Can Am Spyder, to its fleet of luxury vehicles.

Major General Khamis Al Mazeina, chief of Dubai Police, said that the move was aimed at upgrading patrols and enhancing police presence at tourist sites in the emirate.

The department is also seeking to keep up with international standards to establish safety and security, he said, adding that the motorcycles can be used for indoor events and in narrow streets.

The Can Am Spyder, a three-wheeled motorcycle manufactured by Canadian firm Bombardier Recreational Products, has been painted in the police’s traditional white and green colours.

The bike joins the police’s growing fleet of supercars, which includes the likes of a Bugatti Veyron, a McLaren MP4-12C and the extremely rare Aston Martin One-77.

The Dubai Police has been ramping up its supercars fleet since the start of 2013, introducing a Lamborghini Aventador and a Ferrari FF in April and a spew of new luxury sports cars in May including a Mercedes-Benz SLS AMG and a Bentley Continental GT. It has since added an Audi R8, a Mercedes G class Brabus, a Nissan GTR and a Mercedes SL 63.

In a statement last year, the police said it will introduce ‘Police specification’ sports cars into its fleet to “help facilitate policing on highways.”