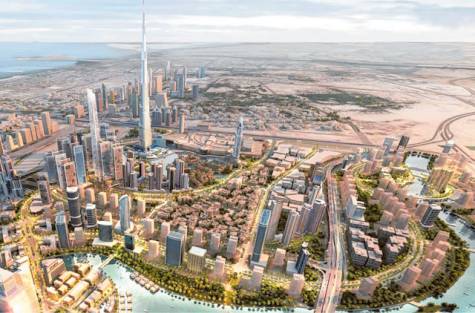 Dubai announced plans for a huge tourism and retail development including the largest shopping mall in the world, a fresh sign that the glitzy emirate has recovered its commercial ambitions after a crippling corporate debt crisis three years ago.

The development, on the outskirts of Dubai’s current downtown area, will include a park 30 per cent bigger than Hyde Park in London, said Dubai’s ruler Sheikh Mohammed bin Rashid al-Maktoum, also prime minister of the United Arab Emirates.

A retail complex named the “Mall of the World” will be able to host 80 million visitors a year and include over 100 hotel facilities, Sheikh Mohammed said in a statement on Saturday.

A family entertainment centre linked to the mall, developed with Hollywood’s Universal Studios, a unit of Comcast Corp , would be designed for six million visitors each year.

The development, named “Mohammed Bin Rashid City”, would also include a district of art galleries and an area where entrepreneurs could develop businesses.

Sheikh Mohammed did not say how much the development would cost or when it would be finished, but his description indicated investment would total many billions of dollars. It would be built by Dubai Holding, a conglomerate owned by him, and Dubai’s leading real estate firm Emaar Properties.

“The current facilities available in Dubai need to be scaled up in line with the future ambitions for the city,” Sheikh Mohammed said, adding that Dubai aimed to become a business and cultural capital for two billion people in surrounding regions.

Such ambitions would have seemed ludicrous three years ago, when a crash of Dubai’s inflated real estate market triggered a corporate debt crisis that forced state-owned conglomerate Dubai World into a $25 billion debt restructuring. Some of Dubai Holding’s own units restructured their debt.

Property prices plunged over 50 per cent from their peaks and neighbouring Abu Dhabi, which has most of the UAE’s oil wealth, came to Dubai’s rescue with a bailout worth over $10 billion.

But Dubai, home to the world’s tallest building, an archipelago of man-made islands and an indoor ski slope in one of its shopping malls, has staged a dramatic recovery this year, partly because of a tourism boom.

Tourist arrivals grew 10 per cent and hotel revenue 19 per cent in the first half of 2012. Some state-linked companies have made progress working through their debt loads, while property prices have started to rebound in some areas.

Arab Spring uprisings in the Middle East, including Syria’s civil war, appear to have helped Dubai, which has attracted funds seeking a politically and economically stable haven.

Several extravagant real estate projects, shelved during the debt crisis, have been revived in the last few months, including a $1 billion replica of India’s Taj Mahal that would include a 300-room hotel, and a canal to the city’s business district.

Passenger traffic at Dubai International Airport will exceed 50 million people this year and the airport is being expanded. Sheikh Mohammed said traffic would top 90 million in six years and Dubai’s development should revolve around this prospect.

“Our development initiatives concerning infrastructure in all sectors should be aligned with this growth rate and we have the determination to reach our objectives and be the first in the region to achieve them,” he said.

Sheikh Mohammed did not say how the latest development plan would be financed. Although yields on bonds issued by Dubai firms have plunged this year, showing a return of investor confidence, some bankers are concerned that Dubai is merely pushing many debt maturities into the future without selling assets and taking other difficult steps to cut the debt load.

Standard Chartered said in a research note this month that while the recovery of key areas of its economy would help Dubai, its entities would face nearly $50 billion of liabilities maturing between 2014 and 2016, and there had been “little progress on the deleveraging front”.