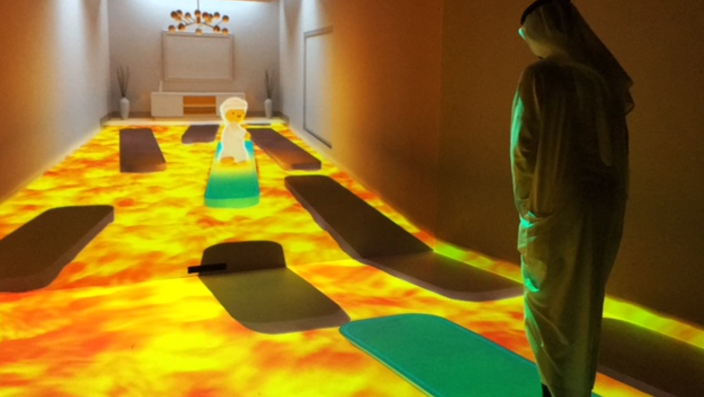 A micro-pill that will permit you to eat anything you desire. Tiny chips embedded in your brain that will help control your moods, connect with your colleagues or share your dreams with others while you sleep. Small devices implanted in your knees that will enable you to run at superhuman speeds.

These are some of the possible innovations that might become the norm by 2035. Displayed within the Museum of the Future exhibit at the World Government Summit in Dubai last month, these science fiction-styled gadgets joined other, already live technologies such as autonomous cars and responsive toy cats.

“The way we are framing our content is in the form of questions – very challenging and tough questions,” explains chief executive officer of the Dubai Museum of the Future Foundation Saif Al Alili.

“For example, would you allow for a human augmentation procedure on your child to help him or her excel in school? Or would you allow a robot or an artificial intelligence system to take care of your parents?

“So we are asking all of these questions that have a lot of complexities as well as moral implications and we are trying to find the answers for them,” he says.

These questions were posed to the over 3,000 dignitaries from 125 countries including representatives of world governments, chief executives and officials who participated at the summit.

Themed around ‘shaping future governments’, the event this year explored how aspects such as AI and new technologies are transforming the way we live, work and lead our lives.

“Based on research, the timeframe for these technological inventions to materialise and start impacting our lives is five to 10 years. What we are trying to do is to expedite their rollout [by being present at the summit]. We might be able to accelerate the investment and research and development. We will be able to inspire people to put more effort to make this happen,” he adds.

The self-driving car, connected to the internet, can read signs such as traffic lights and recognise what is going on around it.

“This is not only a car, this is a new way of living,” says Akka Technologies’ secretary general Matthieu Balescut.

“That’s because if you don’t drive you have time to do other things – work, enjoy entertainment in the car or watch TV. If you have a friend or family members who can’t drive, the car can go to their place and pick them up,” he adds.

Balescut admits that the prototype required a lot of time, effort and resources with a price tag of roughly €4m (around Dhs 16m). But the prices will come down as such cars become mainstream, he insists.

“When you have got an innovation rupture at the beginning, you have the first phase when it costs a lot. But once it becomes industrial, the price is less expensive. For instance, the radar on top of the car costs €70,000. But if you produce it in an industrial scale, it will cost less.”

He expects such cars to become available at “normal costs” within the next three to four years.

One major challenge is that governmental rules and regulations need to be modified to accept self-driving cars on the road. But the change has already started, with cities like Tokyo planning to deploy self driving cars from this month onwards in preparation for the 2020 Olympic Games.

“It would be a good idea if we could have these kind of cars in the streets of Dubai during Expo 2020. Once Dubai’s innovation strategy is implemented, if we are able to respond to the need, we would like to discuss the matter with them,” Balescut adds.

Whatever technological advances we may see within the next 20 years, it’s clear that Dubai intends to be at the forefront of its development and implementation.