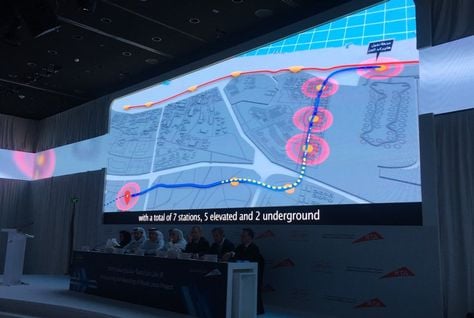 Dubai’s Route 2020 expansion of the city’s metro system is set to start operating on May 20, 2020, five months prior to the Dubai Expo mega event, it was announced this week.

In a tweet, Dubai Media Office said the Route 2020 project covers the extension of the Dubai Metro Red Line by 15km from Nakheel Harbour & Tower Station to the site of Expo 2020 in Jebel Ali.

The Route 2020 expansion will begin from Nakheel Harbour and Tower Metro Station on the Dubai Metro’s Red Line and extend 15km with seven new stations – five elevated and two underground.

The transport authority said the project includes the procurement of 50 trains – 35 to upgrade the metro service and 15 for the Expo service.

The new stations will serve residential areas such as Discovery Gardens, Furjan, Jumeirah Golf Estate and the Dubai Investment Park.

Passengers should be able to travel from Dubai Marina to the Expo2020 site in 16 minutes, officials have said.