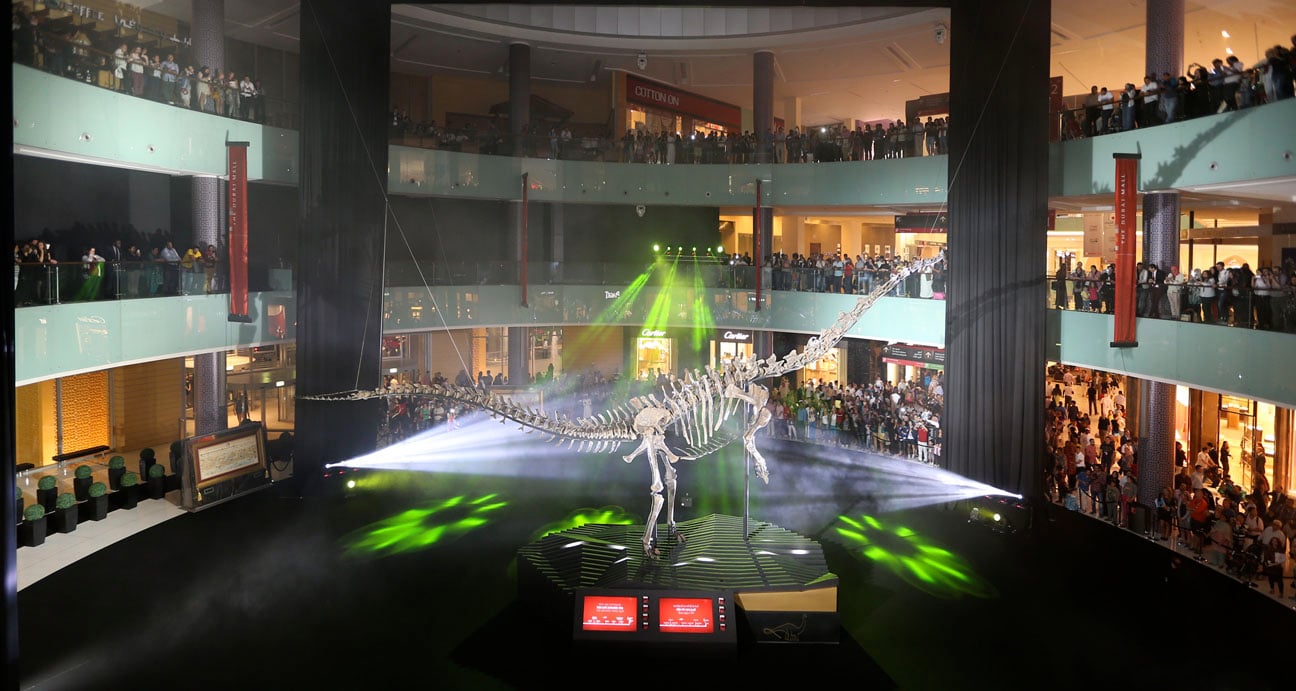 Dubai developer Emaar has unveiled an exhibit featuring a 155 million year-old dinosaur in its popular Dubai Mall, it announced on Tuesday.

The Diplodocus longus, a late Jurassic period dinosaur, is 24.4 metres long and 7.6 metres high and features a long tail and a slender neck. Nearly 90 per cent of the fossil’s bones are original and it is on display at the mall’s Grand Atrium.

The exhibit, open for free viewing for the public, was assembled by an expert team of paleontologists, Emaar said.

Sourced through Khalid Seddiq, founder of Etihad Modern Art Gallery in Abu Dhabi, and previously only displayed at the Houston Museum of Natural Science, the dinosaur is the first fossil bone mounted in an upright position.

The specimen was discovered in 2008 at the Dana Quarry in north central Wyoming and was found in the sleeping position. All bones unearthed were complete and in superb condition.

A dedicated team of staff on-site will provide visitors with insights into the displayed dinosaur, the discovery of the fossil and the labourious process that went into reconstructing it to its present form, the statement said.

Natalie Bogdanova, senior director, Business Development & Operations, Emaar Malls Group, said: “In addition to the dinosaur exhibit, visitors will have the opportunity to have a closer look at the fossil’s structure through a one-metre long original bone on display.

“The exhibition will significantly scale up the mall footfall, given the keen interest of dinosaur enthusiasts from around the world.”

The mall, which had an average monthly footfall of 6.25 million last year, claims that it is the world’s most-visited destination.

Over 40 per cent of the visitors to the mall were tourists, with the majority of overseas visitors coming from Saudi Arabia and the GCC, China, India, Russia and Europe.