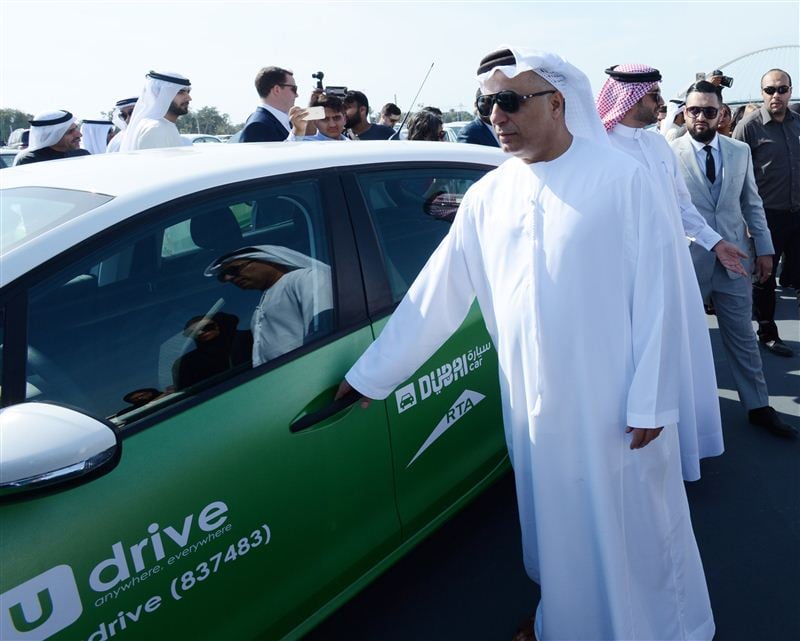 The new service allows customers of Udrive and ekar to rent cars for a period not exceeding six hours via the companies’ respective smartphone applications.

The two operators have been contracted to operate 100 vehicles each with fares ranging from Dhs0.40 to Dhs0.50 a minute or Dhs24 to Dhs30 an hour.

The service is available via smartphones and tablets from today and will later be integrated into Dubai’s Integrated Mobility Platform.

HE Mattar Al Tayer, director general and chairman of the RTA, said vehicles would be deployed in 45 locations including at the Rashidiya, Burjuman, Ibn Battuta, Union, and Business Bay Metro Stations.

The fleet will be increased via a tender and more locations will be added after the first phase of the operation.

The RTA could also introduce environmentally friendly electric or hybrid vehicles to the fleet, he said.

UDrive first launched a pay-per-minute rental service in Dubai in March last year with a fleet of 50 Toyota Yaris cars available to members who paid a Dhs20 monthly fee.

However, it quickly suspended the option due to regulatory and administrative issues, instead offering daily rentals for Dhs99.

Following this, Dubai Crown Prince Sheikh Hamdan bin Mohammed Al Maktoum issued a new resolution in September allowing cars to be rented by the hour provided they are not rented for more than six hours a day and aren’t taken outside the UAE.

Dubai residents looking to use the new service will need to register by entering ID, driving licence and credit card details as well as a photo of the ID holder.

Following the validation of this data, they will be issued with a PIN code allowing them to use the app to track and book cars.

Upon arriving at a vehicle, the car door is opened via the smartphone app and switched on by entering the PIN on a device inside the vehicle

The vehicles are locked through the smart app and can be parked at RTA parking lots only.

They must also be insured, registered, and free of unapproved promotional material and be equipped with GPS tracking so data can be provided to the RTA’s Licensing Agency.