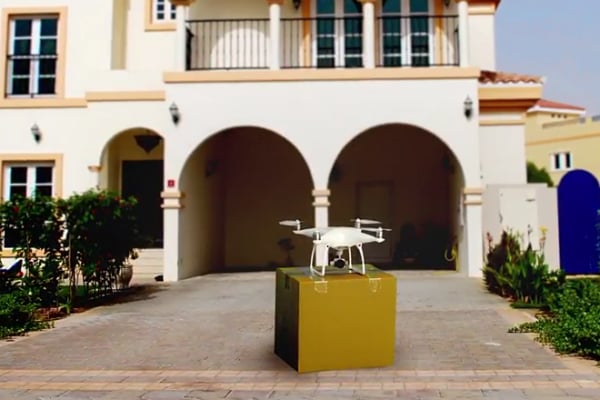 Dubai-based technology group Eniverse Technologies has announced a partnership with US drone company Skycart with the intention of introducing home delivery via autonomous aerial vehicles to the UAE market.

Under the plans, explained in a short YouTube video, the companies hope to partner with UAE businesses to deliver packages weighing no more than 5kg, including food items, via self-flying drones.

The venture, Space Autonomous Drones, is looking to collaborate with logistics, shipping and e-commerce firms with an eye on launching operations between 2018 and 2019, according to reports

Communities with few high rise buildings have been selected for the initial launch period including Emirates Hills, The Meadows, The Springs, The Greens, Jumeirah and Umm Suqeim.

The company is currently awaiting legal approval for the plans from the UAE government.

Global e-commerce giant Amazon has been experimenting with drones as a delivery method in the UK and several other companies also see the potential for the technology to replace traditional road-based vehicles.

In a report released this week, PwC consultancy unit Strategy& forecast the GCC market for drones would reach $1.5bn by 2022, although the majority of use cases were deemed to be in the oil and gas ($633m) and utilities ($484m) industries.