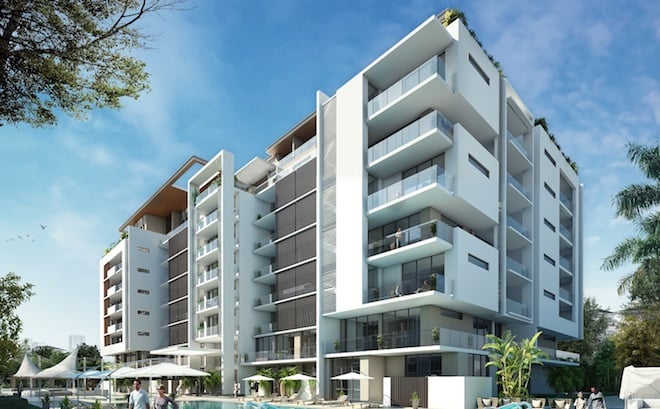 The eight-storey residential project – called Sobha Hartland Greens – includes a range of apartments including studios, one, two and three bedrooms.

Residents will have easy access to restaurants and entertainment facilities within the community.

The apartments are priced from Dhs 804,000 onwards, the developer said.

Handover of units will start from December 2017.

Sobha Group founder and chairman PNC Menon said: “The launch of Sobha Hartland Greens comes in line with the huge demand we are witnessing for luxury living in Dubai.

“The apartments have been designed to enhance the lifestyle of residents with an abundance of living space and expansive layouts.”

Spread over eight million square feet, the development is also expected to include three hotels.

Dubai’s property market has seen a slowdown in the last two years following a sharp rise in prices and increasing supply in the market.

Average sales prices for apartments and villas fell between 11 to 13 per cent between 2014 and 2015.

Experts have warned that Dubai’s property market will face a “challenging” year in 2016 although recovery is expected by 2017.

“Although 2016 could be challenging in the short term, with effective regulations in place and the infrastructure investment that is committed as part of Expo 2020, we should see an upturn in the real estate industry in 2017,” partner and head of Building, Construction and Real Estate with KPMG Lower Gulf Sidharth Mehta said in a recent report.

“While oil prices remain well below the long term average, which is clearly having an effect on market confidence, Dubai’s improved regulatory environment, broader investor profile, and increased maturity are all indicators that its real estate market should eventually self-correct,” he added.