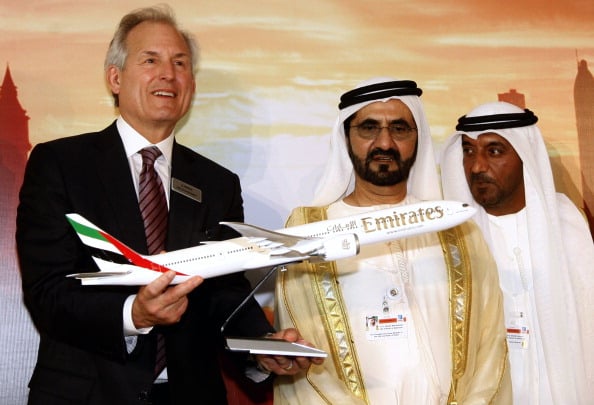 Most of the time Fabrice Brégier is the most important man in a room. He is the president and CEO of Airbus – a multibillion-dollar company responsible for the production of roughly half the world’s jet airliners.

Yet on more than one occasion this week, Brégier, a pensive French technocrat, has played second fiddle to his customers at the Dubai Airshow.

It is another sign, along with the mind-blowing figures for planes and payments this week, that the aviation world is firmly gripped by, and at the beck and call of, the Gulf’s carriers.

Sat next to Akbar Al Baker, CEO of Qatar Airways, as the airline chief announced an order for five new A330 freighter aircraft, Brégier appeared humbled.

It has been two years since Al Baker declared the French manufacturer ‘was still learning how to make planes’ and although the relationship appears mended, it was clear who now wears the metaphorical trousers.

“Two years ago when we had our first contract with Airbus, I didn’t have so many white hairs. So you can see who is the cause of this,” Al Baker joked to an amused media room.

The comical remark, made firmly tongue-in-cheek, offered a brief glimpse into the relationship not solely between Airbus and Qatar Airways, but between the ‘Gulf’s Big Three’ – Qatar, Emirates and Etihad – and all plane manufacturers.

Brégier was even snubbed somewhat by the international press. The boss of Airbus would normally be a fantastic name to interview, but the vast majority of questions went to the man seated next to him, with Brégier left silently smiling on.

James McNerney, chairman and CEO of The Boeing Company, experienced it too.

The American business executive may have been hand chosen by Barack Obama to chair the President’s Export Council, but at the Airshow on Sunday he didn’t even make the top three most important men in a very small, cramped media room.

It can be argued that only a few global airlines have royalty at the top of their board, but there is no denying the noticeable power shift which has further marked a tipping point for the global aviation industry this week.

Following a record-breaking first day when GCC airlines spent a combined total of $150 billion for around 300 wide body jets, the Gulf is now firmly recognised as the world’s travel hub, perfectly placed on the crossroads of East and West.

Whereas in the past, heads of plane manufacturers held the power with European and American carriers making orders in the low double figures, the shots are now called by the Gulf’s Big Three.