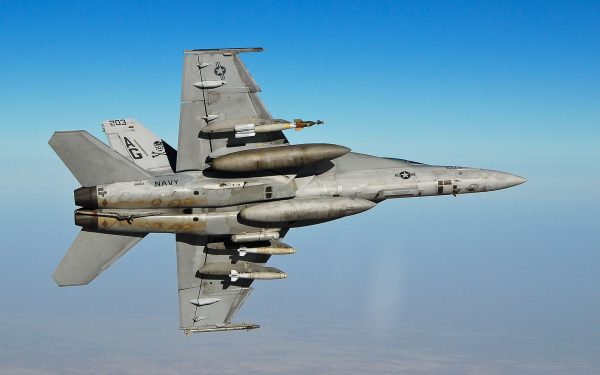 Boeing’s chief F/A-18 test pilot pulled the nose of the Super Hornet up into a steep 40-degree angle, then tilted the wings to the left and right, as he demonstrated the popular Navy fighter jet’s ability to maneuver, even when under attack.

Loops, pirouettes and even a freefall on the plane’s back followed during a demonstration flight on the opening day of the Dubai Airshow, where Boeing is showcasing a broad array of warplanes, including the F/A-18E/F, its C-17 transport planes and the P-8A maritime surveillance plane.

Boeing is scrambling to drum up additional orders for the F/A-18E/F Super Hornet and the EA-18G Growler electronic attack plane before its production line is slated to end in 2016.

Ricardo Traven, a former Canadian Air Force pilot who has worked on the Super Hornet program since 1997, said he is convinced that the plane’s capabilities will attract additional orders to keep the line running.

“These are the dark days right now,” Traven told Reuters in a pre-flight briefing before a 40-minute flight at altitudes of up to 18,000 feet. “But it’s such a solid airframe. The capabilities are understated, and I think the capabilities of our competition are hugely overstated.”

Traven said Boeing had updated the technology on the F/A-18E/F fighter over the past decade, which meant it was more advanced and even stealthier – or able to evade enemy radar – than critics generally understood.

High above the Dubai Airshow, Traven demonstrated 7G turns – delivering seven times the force of gravity on the pilot and reporter in the backseat – and the jet’s ability to continue delivering missiles or bombs even at high angles of attack that he said would stall out the Lockheed Martin Corp F-16 fighter or the Eurofighter Typhoon built by a European consortium.

To demonstrate the capability of even the relatively old radar installed on the jet used for the demonstration, Traven pinged a car on a desert highway and identified the unwitting driver’s exact speed – 59 miles per hour.

Boeing had hoped to continue selling the jet to the Navy, to hedge against possible delays in the F-35, but now faces tough choices in coming months about whether to spend its own money to keep the F/A-18 production line running.

Industry executives and analysts say it’s too soon to write a eulogy for the popular Boeing fighter jet, but they do see turbulence ahead for a warplane that first kicked off 21 years ago and remains popular among Navy officials.

Boeing had good odds of winning a big Brazilian fighter competition, but that was derailed earlier this year after revelations of U.S. spying on President Dilma Rousseff. Malaysia, which was also considering the F/A-18, has postponed its fighter tender due to budget pressures, and talks about a possible order from Qatar are still in the early stages.

And then last month, the U.S. Navy abruptly revoked a notice on a federal procurement website about a possible order of 36 F/A-18s or EA-18G electronic attack planes – after the news raised questions about its commitment to the carrier variant or C-model of the F-35.

But behind the scenes, executives are increasingly worried whether enough new orders will materialise in time to justify the millions of dollars in investments needed to maintain F/A-18 production in St. Louis past 2016.

The company must decide in coming weeks and months whether to self-fund certain long-lead materials required for future production – or whether to begin preparing for a line shutdown, according to industry executives.

Dennis Muilenburg, who heads Boeing’s defense, space and security division, told reporters in Dubai it was too soon to write off the F/A-18 and F-15 fighter jets.

He said Boeing remained engaged in several competitions, including Brazil, and the “fifth generation” label used by Lockheed for its F-35 jet was a convenient marketing term.