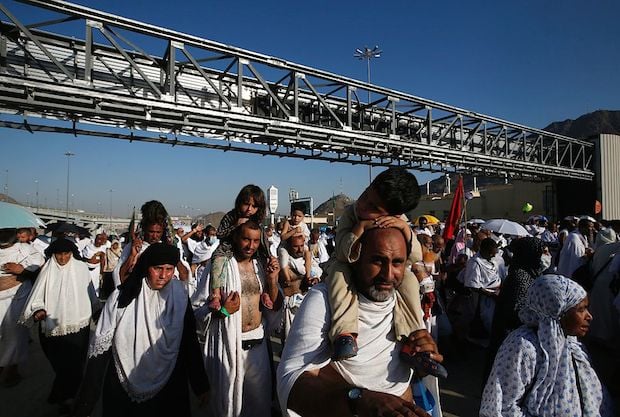 Saudi businesses catering to haj visitor have taken a hit this year as far fewer pilgrims arrive and those who come have less cash to spend.

Saudi authorities say only about 1.86 million pilgrims, including around 1.3 million coming from outside the country, are attending this year’s haj, down from peak figures that approached three million a few years ago.

The number of visitors from abroad has fallen by around 20 percent and the number from within Saudi Arabia has fallen by half, said Marwan Abbas Shaaban, head of the kingdom’s National Committee for Haj and Umrah. Overall, haj-related business was down by half, he said.

Every Muslim who is able and has the means is expected to travel to Mecca in Saudi Arabia during the annual haj month at least once in a lifetime. Muslims also visit the holy city at other times of the year for pilgrimages known as umrah.

Those who are still coming have less to spend, said Ali al-Hirabi, who hawks gleaming gold necklaces and rings from a shop in the holy city. “They come, but their situation isn’t like it was when there was peace in the world,” he said. “It’s the Arab countries that are the problem.”

Saudi Arabia itself and many of its Arab neighbours are suffering from the fall in global oil prices that has cut state budgets, lowered wages and reduced lavish domestic spending. War across the Middle East has also hit the haj.

Officials give a variety of reasons for the declining visitor numbers. One of the most obvious is a boycott by Iran, which barred its citizens from attending this year’s haj after diplomatic relations with Saudi Arabia collapsed following the Saudi execution of a Shi’ite cleric.

Efforts to find a way for Iranians to come faltered over Tehran’s accusations that Riyadh was to blame for poor safety at last year’s haj, when at least 2,070 people died in a crush. Saudi Arabia says safety has improved over the years and accuses Iran of polticising the rite with its criticism.

Shabaan said Iranians typically made up 7 per cent of foreign haj visitors, and their absence did not account for the bulk of the fall-off in numbers.

He said another factor was the construction under way in Mecca itself, which is designed to increase its capacity to accept haj pilgrims in future, but means there is less room while the building is still under way.

“Over the last three years there has been a reduction in the number of pilgrims because of the expansion of the Two Holy Mosques and the massive infrastructure improvements,” he said, also citing “political conditions in some countries and economic conditions.”

Wars in Syria, Iraq, Yemen and Libya, which have brought down numbers in past years as well, have worsened this year. Most Syrians and Yemenis now live in territory controlled by warring sides opposed by Saudi Arabia, making it difficult to get visas.

“There is certainly an effect on economic sectors, but the private sector is always looking toward the light at the end of the tunnel and the investment opportunities that are present.”

He said the renovations to expand Mecca’s Grand Mosque and nearby hotels, which have turned the area into a tangle of cranes, would drive future business and let the city accommodate 3.7 million haj pilgrims in 2020 and 6.7 million by 2042.

As part of a reform plan to wean Saudi Arabia off its dependency on oil, the government aims to encourage even more visits to Mecca outside of haj season, raising annual pilgrim numbers to 30 million by 2030 from 8 million at present.

Some architectural and cultural critics have lamented the changes to Mecca’s landscape from the development projects, which include highrises and a 76-story clocktower.

Meanwhile, despite the smaller crowds, merchants in Mecca do not seem to be lowering their prices. The high cost of basic goods, especially near the Grand Mosque, is a perennial complaint for pilgrims.

Senior Saudi cleric Sheikh Abdullah Bin Sulaiman al-Manea told Okaz newspaper businesses should not gouge customers, and criticised the spread of billboards in the city: “The duty of haj should not become a venue for trade, profit and gain.”

Fatima al-Murabit, a Moroccan who together with her husband was visiting for the second year in a row, said prices had gone up since last year.

“Even dates are expensive, and bad manners are a general feature of traders and workers in the markets,” she lamented.

“There is exploitation of the ignorant. I hope that gets changed in the future. People come for the Prophet’s Mosque and the Kaaba, but there’s some exploitation and a lack of oversight.”