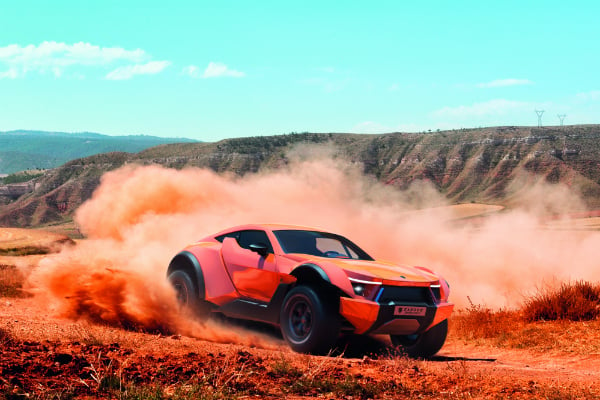 The UAE is no stranger to supercars with a brief jaunt along Sheikh Zayed Road often yielding as many expensive brands as a motor show.

But for three men involved with the local motorsport industry there was clearly something missing among the numerous Lamborghinis, Ferraris and Bugattis lining the country’s streets.

The answer, as they came to conclude, was a supercar that could form the backbone of a new racing series by being as at home on the streets of Downtown Dubai as the orange sand dunes in the distance.

It was with this in mind that UAE motorsport veteran Mohammed Al Qadi, French racing expert Bruno Laffite and strategic consultant Iannis Mardell gathered in 2014 to discuss a brand new concept.

“The inspiration was basically a car a lot of people wanted — a supercar that you can take where other supercars can’t go. I.e. to the desert,” explains Mardell, who oversees the company’s finance, strategy and marketing.

“We found that the local motor sports needed something new. One thing lead to another and we decided to build a car that didn’t exist that we saw was quite suitable for the local market.”

With initial funding of $2m, the three had their basic specifications for the vehicle in place by March 2015 and the following month they secured Spain’s GP2 Campos Racing team as a key engineering partner. In the following months initial sketches were made of the body and the first chassis was welded, and in September the three settled on a brand name — Zarooq Motors.

By November — just in time for that year’s Abu Dhabi Grand Prix — the three were ready to reveal their concept to the world, and progress since then has been relentless.

“We started with motor sport in mind, and building on first our technical trials, and [using] the feedback that we were getting from customers and potential customers who clearly wanted something more upmarket, more powerful, we went through a lot of improvements and changes,” Mardell explains of the process.

“That’s why it took us a little bit of time before we thought we were in a position to come out and say here it is we’re finished — this is what we’re putting in the market.”

Accelerating to June 2017, the team had made the necessary preparations and put together a supply chain to produce cars. Zarooq Motors announced triumphantly that the first limited edition series of 35 SandRacer 500 GTs, with a price tag starting from $450,000, were ready for production and sales were underway.

The finished product is described by the company as a two-seater, rear-wheel drive, mid-engine supercar with fixtures and fittings to match, including a luxury hand-stitched leather interior by Germany’s Mansory and a carbon fibre body made in Belgium. And it has certainly attracted attention with motoring series Top Gear describing the vehicle as a “cross between a BMW X6, Range Rover Evoque and a Dakar racer”.

Production of the initial batch of the SandRacer series is taking place both in the UAE and Europe with the more complicated parts shipped in from the continent and final assembly occurring locally.

The company plans to build “economies of scale” to localise “more and more” manufacturing, bearing in mind some components are cheaper when shipped from Europe or the US.

“Yes, our objective is to localise as much as possible in the UAE,” Mardell says, although he suggests full manufacturing in the country could only happen in the “very long-term”. 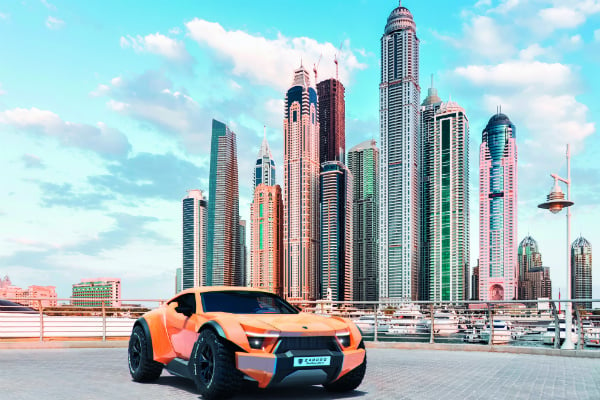 “Let’s take simple things like engines. There are some key components that would be very difficult to completely manufacture here. At the end of the day completely building the chassis and the body, I see this as something very feasible in a fairly short amount of time, where as building local dampers and stuff like that I don’t see it for quite a while.”

Zarooq Motors is also aspiring to build the local automotive industry in a market that is still lacking in volume and expertise. Although the Gulf’s streets are lined with supercars, Mardell says the actual market size is smaller than Japan and there is a lack of skilled local talent and supporting educational institutions or apprenticeships.

Zarooq Motors wants to contribute to the growth of both areas through working with young nationals alongside experienced engineers.

“The solution will be through apprenticeships and through raising and breeding our own people rather than hoping,” he says.

The company is initially aiming to build a client base within the Gulf region where it’s operations are based and it can provide proper aftersales support including a 48-hour response bespoke repair team. It plans a more structured approach to international development due to barriers to entry in countries like the US but in theory can ship cars anywhere on a spot basis.

With this in mind, Mardell says demand from Zarooq’s target wealthy client base has held up well despite putting the finishing touches to the supercar during an oil-linked slump across the Gulf Cooperation Council.

“First of all the top end of the market is not that affected by it and secondly — even though we’re based here and clearly our first clients are here — our market is global and therefore the local economy in the local market in the long run will not just be our sole source of clients,” the co-founder says.

“We already have a lot of demand in Europe, the US and China, so we’re not too worried about these market bumps.”

The next step will be to gauge the response to its first series of vehicles, with a second series based on similar specifications likely to follow.

Beyond this, he reveals Zarooq has “some other projects in terms of different types of cars with different power trains and different specifications” in the works.

“We don’t aim at being a large manufacturer we aim at maybe producing in the long run 100 to 200 cars per annum. But we definitely want to diversify in building different vehicles.”

One potential avenue could be a sports utility vehicle following in the footsteps of other luxury manufacturers that have entered the segment including Lamborghini’s Urus and Bentley’s Bentayga.

“Today we have a two-seater where the direct competition would be more extreme sports cars like Lamborghini and the like. This is a great market but obviously the more practical the car the bigger the market potential.”

In the longer term, as the brand builds a name for itself, he suggests merchandise and even food and beverage concepts could be on the horizon.

To fuel these future plans the company plans to begin a $10m funding campaign in the autumn with the objective of closing by year-end, which could bring in more investors among its existing group from Europe and the Gulf.

“We are talking to some investors and families and want to make sure we strike the best partnership in terms of fit and also potential synergies,” Mardell says.

Until then, keep an eye out for the SandRacer on the UAE’s roads in the coming months, with the first models set for delivery by the fourth quarter.