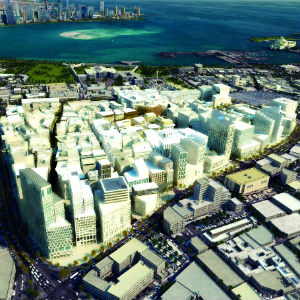 As you make your way south on the Doha Corniche, a looming facade of scaffolding, reinforcing bars and cranes emerges as backdrop to the palaces, lawns and quaint stucco frontage of old Doha.

This is inner-city regeneration Gulf- style, as a new project turns heads in the global architecture community, and Qatar slowly readies itself for a deadline in a decade from now.

Winning the bid for to host the FIFA World Cup 2022 means the small but ambitious emirate needs to prepare the heart of the city for a mass influx of tourists when the tournament finally takes place. The footballing spectacle is expected to draw around half a million visitors to Doha, and parts of its downtown district are currently unable to provide amenities for such a large influx. A solution had to be found.

Mirroring the approach of hydrocarbons-rich governments everywhere, Qatar has opted for a solution that matches the “Expect Amazing” tagline of its successful FIFA bid. Msheireb Downtown, a massive, mixed-use heritage and culture site, is set to become the new heart of the old town. Qatari developer, Msheireb Properties, is managing the project.

A unit of the Qatar Foundation for Education, Science and Community Development, and announced in 2009 as Dohaland Properties, the company’s name was changed in April 2011 to better reflect Qatari heritage. The company and project’s name is a reference to historic Doha’s first focus, the district of Msheireb, which grew up around a well or water fountain, and refers to the place where, decades ago, people went to get a drink of water.

Doha has undergone huge development, particularly in West Bay, an area serving as a crucible for its ambitions to be a global financial and tourism centre. A forest of towers soars into the sky at the north end of Doha’s main bay, home to the Qatar Financial Centre, the Tornado office tower and plush hotels like the W Doha. Up the road is the prestigious Pearl man-made residential island, where locals and expatriates have flocked for the finest villas and apartments the rich statelet can provide.

Conversely, at the bay’s south end, ostensibly still the centre of the city today, Doha bears vestiges of the tight- knit and intimate Qatari community that sprung up there from its establishment in 1825. Souq Waqif has seen some sprucing up along the lines of Dubai’s Madinat Jumeirah, but the area cannot sustain a major tourist invasion. A bout of redevelopment was long overdue, and it is instructive that the project was conceived and begun before Qatar actually won its World Cup bid.

Situated in the shadow of the imposing Emir’s Diwan, or meeting place – actually it looks more like a palace – Msheireb Downtown is Qatar’s solution to the knotty problem of how to present a traditional but modern face to the world in a part of town which otherwise would not stand up to inspection.

Msheireb Properties is leading urban regeneration in the emirate through the $5.5 billion, 100-building scheme. The precinct, in which all property will be leased, will be grandly built, while at the same time accommodating the Qatari preference for haphazard streets and enclosed, cool spaces. It has attracted attention by posing a stark contrast to the parallel lines of Dubai’s landscape, where a housing crash has had an adverse effect on the Qatari housing boom.

Chief executive, Issa Al Mohannadi, has high hopes for Msheireb: “It is going to put Qatar on the map, just like Al Jazeera Television did. We should not try to mimic [development] in other cities.”

Demolition and ground-breaking took place in 2009. The complex will house 900 residential units and four hotels, as well as commercial, retail, cultural and entertainment space. The avenues in the precinct are narrow and crooked.

“Street alignment has been kept as it is,” says Mohammed Al Marri, Msheireb Properties’ projects director, another participant in the project with over a decade’s oil and gas industry experience.

Phase One of Msheireb, the “Diwan Amiri Quarter,” is now under construction and features three major government buildings, heritage sites, a museum, a cultural forum, the National Archive and an Eid Prayer Ground. The preservation of four “Heritage Houses,” Bin Julmood House, Company House, Mohamed Bin Jassim House and Al Radwani House, means they will be turned into museums after restoration is complete.

Subsequent phases will include the 5-star Mandarin Oriental Hotel, announced in 2010, three additional hotels, two 5-star and one 3- or 4-star, office space, several residential types, retail outlets and restaurants. The project will also have a community and arts focus, with a cultural forum, school, nurseries and mosques. Phase Four, also comprising the metro system, is under evaluation now.

The current state of the construction site now under way is not for the faint- hearted, as visitors are paraded through a forest of enclosed space, elevators, and given grand views of its excavations.

About half of the site is a sea of concrete with floor after floor slowly rising skywards, while later phases are still a huge pit with bulldozers working away to remove earth. A fleet of diggers will shift 3.5 million cubic metres of rock and topsoil to make the project possible.

Thirty third-party safety officers constantly do the rounds to ensure that dangers to an army of workers do not arise. “We have 6,500 people working on the project today. In a month or so, that will rise to 12,000. In 2014-15, at project peak, 21,000 will be involved. We have seen 16 million man-hours without an LTA [lost (work) time accident],” says Mr. Al Marri.

The axe-head shaped 31-hectare site has a perimeter of 2.5 kilometres. A joint venture of South Korea’s Hyundai and the local HBK is working on the diwan annexe and colonnade. Twenty-four cross bridges will be put in to facilitate movement around the complex. Some 11,700 parking spaces will be situated underground, along with a new metro station. The aim is to minimise the impact of traffic in the city centre.

So far there has been no delay in the project, launched in January 2010, due to the financial crisis. “We are insulated from the impact of recession,” says Al Mohannadi. Msheireb Properties are likely to work on other projects and there is at least one “in the pipeline now,” he says.

“[Our] mission is to change the way people think about urban living and improve their overall quality of life, through innovations that encourage social interaction, respect for culture, and greater care for the environment,” it says. “[We have] spent three years researching Qatari architecture and numerous approaches to urban planning all over the world with the most respected experts in the industry in order to realise an architectural language rooted in the best of the past that may be preserved for and by future generations.

One port of call is mandatory. At the “Msheireb Enrichment Centre,” visitors to Qatar get a glimpse of the thinking behind Msheireb and a visit to the centre sees company official Hamad Al Naimi give a guided tour of the modern heritage site. The hand of Sheikha Moza bint Nasser Al Missned, wife of the Qatari Emir w
ho chairs the Qatar Foundation, is evident. She is doing much to help inspire Qataris to prepare for a future that presents a more open face to the world.