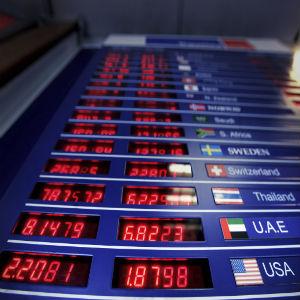 The Dubai Gold and Commodities Exchange (DGCX) announced that total trading volume hit 853,191 contracts in May this year, up 259 percent compared to the same period in 2011.

The total value of the contracts reached $32.67 billion during the month- the highest- ever- monthly value achieved on the platform.

Currencies were the best performing sector, with Indian Rupee futures achieving an average daily value of $1.17 billion and a monthly value of $26.82 billion.

The Indian Rupee hit an all-time low of Rs56.51 against the US dollar last month.

Gold futures volumes also rose 117 per cent from the previous month to reach 69,541 contracts. “Heightened trading in the contract reflects the recent spike in the price volatility of the precious metal,” said DGCX.

The precious metal’s prices have been steadily rising, benefitting from safe-haven bids as markets deal with a worsening of Europe’s debt crisis.

Copper futures also rose to 35,153 contracts in May, doubling April’s volume when the contract was first launched, said DGCX.

“Indian Rupee and Gold futures have been the two stand-out performers in May, with increased volumes a reflection of the improved liquidity, tighter on-screen spreads and growing demand for both contracts as tools to manage exposure to price movements in an environment of high volatility,” Gary Anderson, CEO of DGCX said in a statement.