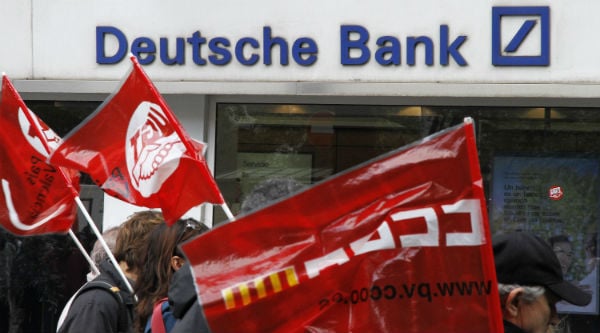 Deutsche Bank, Germany’s largest bank, expects the euro zone to remain intact and its slow pace of recovery to create opportunities for outside investors, its co-chief executive said on Wednesday.

Deutsche Bank AG’s Anshu Jain told business leaders in Dubai that the chances of a country leaving the single currency bloc had diminished.

Fears of a so-called peripheral euro zone state such as Greece leaving the currency union have haunted both markets and politicians as the region’s debt crisis has unfolded.

“Fundamentally, we believe the euro zone will remain intact,” Jain said, saying “the market-implied volatility of a peripheral country defaulting or leaving the euro zone has receded”.

Attempts to get Greece’s debt down to a sustainable level have so far stumbled, with the country’s international lenders failing to agree a deal overnight for the second week running.

Jain used his visit to the Gulf region to highlight the opportunities for its sovereign wealth funds to invest in Europe at a time when many of the European Union’s economies are struggling to kick-start their economies.

European leaders have flocked to the Gulf states, which have built up large reserves as a result of their oil revenues, to try to drum up investment interest in their economies.

“I think the euro zone will be stable, unexciting but stable and something for outside investors to look to as there is still value,” Jain, who is in the Gulf for a week, said.

He also predicted that the world’s banking industry would shrink dramatically as a result of the regulations that have followed the financial crisis, warning that regulation could hit the supply of credit to the economy.