Judicial officials in Abu Dhabi have confirmed that an Australian woman, who was deported this week, had insulted a car owner in a Facebook post.

Jodi Magi, 39, was detained and deported for allegedly posting a picture of a car parked across two disabled parking spots near her apartment block on Facebook.

The vehicle, whose license number was blacked out by Magi on Facebook, did not have a sticker to indicate that it belonged to a disabled person.

Magi was found guilty by the court later on stating that she wrote “bad words about a person in social media” – a charge that she has vociferously denied in her public statements and has also hit back in a latest Facebook post.

However, according to a report in local daily The National, a judicial source in Abu Dhabi confirmed that Magi did use insulting words in her post.

“These included ‘crazy’ and a slang term for the male sexual organ,” the judicial source was quoted as saying.

But Magi has denied these allegations and has posted a cutout of the offending picture on her Facebook page, which she claims was what she initially posted on the social media website. 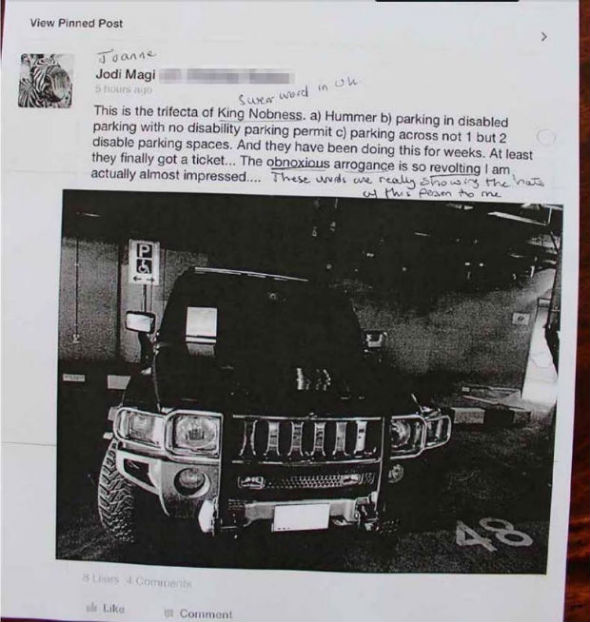 The newspaper also reported that Magi was taken into custody after an European woman had complained to the police that Magi and her husband had uploaded a picture of her car with “insulting and degrading words”.

Following that Magi’s husband was questioned by the police and admitted that his wife had posted the picture but did not resort to insulting the car owner.

But a police enquiry into the issue indicated that Magi had posted insulting words with the picture and the case went to the court.

However when Magi failed to appear for her hearing, she was convicted in absentia and was fined Dhs 10,000 along with an order of deportation. She had also appealed the verdict, which was rejected on June 24, the source elaborated.

But when Magi appeared on Sunday this week to pay her fine at the court, she was arrested and then transferred to Abu Dhabi’s Al Wathba prison. She was then deported on Tuesday to a destination of her choice, the source said.

However UAE officials have maintained that Magi’s actions are unlawful as per the 2012 Federal Anti-Information Technology Crimes Law.

As per the existing laws, individuals can be punished if they insult people and post or tag pictures of others without their permission on social media websites.

But lawyers have also clarified that an individual will not be punished unless an official complaint is registered with the authorities.