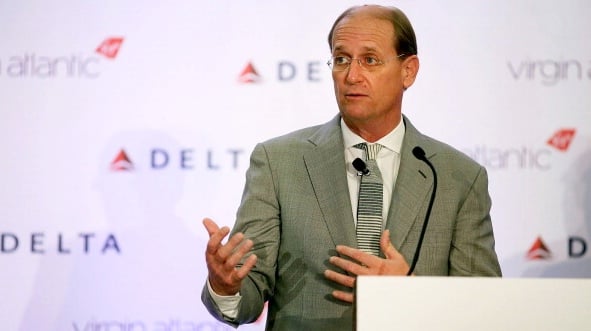 In a continuation of the GCC-US airline subsidy row, Delta Air Lines CEO Richard Anderson has said that “subsidised” Gulf carriers pose the “greatest challenge” to the airline industry.

Speaking at an event in the city of Detroit, he again reiterated the allegations made by the big three US carriers that Emirates, Etihad Airways and Qatar Airways have received more than $42bn in subsidies from their respective government.

Delta, along with American Airlines and United Airlines are trying to persuade the US government to scrap open skies agreements with the UAE and Qatar, citing unfair competition.

The Gulf carriers have denied the charges, saying US carriers are losing marketshare because of inferior services.

“We are supporters of fair trade […] but like many trade relationships there are outliers,” Anderson said. “ We support open skies, we support open and free trade but in this instance we have bilateral agreements that are being violated by those countries.”

The three Gulf airlines have grown four times faster than US carriers without stimulating new market demand and are expanding at the expense of the American airlines, he alleged.

He also warned that “thousands of US jobs were being threatened by the massive subsidisation of the Gulf carriers.”

“What we’ve discovered at Delta Air Lines is we compete against a lot of state-owned and state-subsidised enterprises. When the playing field is relatively level, we win because we have these great people that are committed to their company and committed to their customers.

“But when the playing field is so far tilted, it is difficult in any industry to be able to compete against governments,” Anderson added.

All the three GCC airlines have responded strongly against the allegations.

In a detailed report submitted to the US government earlier this month, Etihad Airways said that the US open skies policy did not prohibit airlines from receiving shareholder loans. The airline said it is required to repay the loan given by the Abu Dhabi government, its sole shareholder.

The Abu Dhabi carrier will also contribute $2.9bn to the US economy and support 23,400 American jobs this year, the airline has said, citing research by the consultancy Oxford Economics.

The study projects that by 2020, the airline’s operating expenditure and capital investments will almost double to support 46,200 jobs and add $6.2bn to the US economy annually.

Emirates president Sir Tim Clark has also hit back against the US carriers stating that the airline’s success has made it a “scapegoat”.

“The real issue at hand is that the three biggest US carriers, who together with their joint venture partners already control about two-thirds of international flights from the US, want to further limit the international air transport choices available to American consumers, airports, local and regional economies,” he said in May.

Meanwhile Qatar Airways CEO Akbar Al Baker has warned that any change in open skies agreements could lead to protectionism.

“Any rollback of liberal market access and open skies policies will reverberate across the whole world and will lead to retaliatory protectionism affecting all aspects of trade,” he said at the International Air Transport Association annual meeting.