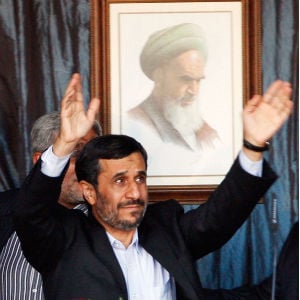 Under pressure from Iranian parliamentarians, President Mahmoud Ahmadinejad defended his government’s failure to clock an eight per cent economic growth, arguing that he has sought to improve the economy and contain inflation “despite limitations”.

The ‘limitations’ Ahmadinejad referred to are the most crippling sanctions Tehran has faced from the international community to date.

The US has turned the screws on its financial system, effectively banning any bank anywhere in the world if it deals with Tehran. In lockstep with the US move, the EU is set to implement its oil embargo on Iran from July 1 this year, cutting Iran off from a third of its oil client base.

Exports of Iranian crude could ultimately be curtailed by around 800,000 barrels per day (bpd) to one million bpd from mid-year onwards, on the basis of the EU embargo said the International Energy Agency (IEA) in its latest report.

That’s a loss of $96 million per day at today’s oil prices.

But analysts are not convinced that the international community can maintain the embargo. Oil prices have risen 20 per cent since December 2011 and are threatening to derail a nascent recovery, particularly in the developed world.

“Going forward, a number of European buyers have expressed concern that they will have difficulty finding replacement barrels of similar quality to Iran’s heavier crudes, especially Italian refiners who process the grades for asphalt,” says the IEA.

Added to this predicament is the news that the embargo may not be as effective as the US would like.

Iranian fuel oil exports to East Asia had risen to 600,000 tonnes by early March, the highest this year and about the same as last year’s monthly averages. It is likely that Iran’s key markets India, China, South Korea and Japan are ignoring Western sanctions as they fret about their own energy security.

Nevertheless, even without unanimous global action, sanctions imposed by the US on Iran’s central bank will disrupt the country’s economy during the months it will take to re-route petroleum shipments from current destinations to an array of new markets, centred in Asia, says Gary Clyde Hufbauer, an Iran analyst at the Peterson Institute of International Economics.

“Any disruption in the general economy would probably slow the pace of developing hardware as complex as a nuclear bomb and configuring it to Iran’s missile capability. But a delay, not a permanent change in Iranian intentions, is the best that can be anticipated. A permanent change, if it comes, will require a reshuffle at the top of the Iranian political pyramid, and the emergence of leaders who no longer seek a nuclear capability to reinforce Persian hegemony across the Middle East.”

IMPACT ON THE GULF

Meanwhile, Gulf states who are wary of ‘Persian hegemony’, seem to benefit from Iran’s troubles and have shrugged off any threats of Iran trying to shut down the strategic Strait of Hormuz.

That’s evident in the regional stock markets, which have outperformed their international peers this year.

Dubai which has the closest trading ties with Iran has seen its stock market index jump more than 25 per cent, and the Saudi Tadawul index is up more than 17 per cent this year in a sign of robust business sentiment.

In fact, Saudi Arabia is the biggest beneficiary of the Iran crisis, pumping a record 10 million barrels per day in February 2012, up more than 150,000 over January 2012. The current price of more than $120 per barrel represents a massive cash flow pouring into the country’s coffers.

Saudi oil imports to the US – which have been in decline for years – have risen 38 per cent with contracted March and April shipping to the US showing a massive uptake.

Overall, the IEA expects Iran’s overall production to fall over time under the weight of sanctions.

The latest proposals are also strengthening legacy US and EU sanctions targeting Iran’s upstream oil and gas sector by closing a loophole that will bar exports of oil-related equipment, drilling rigs or engineering services, says the IEA.

“As a result of tighter sanctions, Iranian production capacity is now forecast to decline by 890,000 bpd to just under three million bpd by 2016,” noted the IEA.

As Saudi Arabia, UAE and Kuwait are the only nations with spare oil capacity, they are bound to benefit long term from the Iranian slowdown.

It’s true that Iran finds itself in a much weaker position than a few years ago. Previously, Iran could find numerous loopholes to get around US sanctions. But stricter pullbacks, even from traditional trade ally Dubai, means reduced trading outlets for the regime.

The current situation build-up is having a direct impact on the Iranian economy, especially food imports. Even as global clients move away from Tehran’s oil, Iranian consumer purchasing power has also taken a hit.

“In the face of increased international financial isolation, nervous Iranian households are converting their savings from [Iranian] rial to dollars in the country’s informal foreign exchange markets,” says Trevor Houser of Rhodium Group in a note on Iran.

“This has caused the currency to depreciate by 40 per cent over the past two months, making imported food 40 per cent more expensive. Financial sanctions have limited the Central Bank of Iran’s ability to intervene and keep the market exchange rate in line with the official target, so instead the government has had to raise interest rates and attempt to ban unofficial foreign exchange transactions.”

But recent diplomatic overtures between Iran and the international community show that not all is lost, and the world is not necessarily trundling towards yet another flare up in the Middle East.

“Pressure can work in reshaping Iran’s priorities but rarely in short order and only when Tehran concludes that a reversal of policy will generate a preferable outcome,” says Suzanne Maloney, senior fellow, foreign policy, at the Brookings Institution.

Iran has a long history of withstanding adversity for perceived gains. The country has ample experience with severe economic hardship, thanks to the dislocating impact of the revolution and war with Iraq.

“The regime is well versed in insulating its preferred constituencies and identifying alternative suppliers of weaponry and technology,” says Maloney.

“Moreover, the regime is convinced that Iran is less vulnerable to the direct costs of crippling sanctions than the West may be to the indirect costs of imposing those sanctions; the regime trumpets the havoc that higher oil prices would wreak on the fragile economies of the Eurozone and the US.”

A SOLUTION IN SIGHT?

Tellingly, Dennis Ross, a former State Department Official who advised Obama on Iran said recently: “Iran can have civilian nuclear power, but it must not have nuclear weapons. Ultimately, Ayatollah Khamenei will have to decide what poses a greater threat to his rule: ending his quest for nuclear weapons or stubbornly pursuing them as crippling economic pressures mount. With Iran reeling from sanctions, the proper environment now exists for diplomacy to work. The next few months will determine whether it succeeds.”

Iran would accept such an outcome, but only if the US and its allies are willing to accept Iran’s right to enrich nuclear fuel.

“To get from where we are to that point, talks would have to follow a road m
ap that makes clear the sequence of issues to be discussed and agreements to be reached in building toward a mutually acceptable result,” says Vali Nasr, a professor of international politics at the Fletcher School of Law and Diplomacy at Tufts University and a senior fellow in foreign policy at the Brookings Institution.

“Without such a road map, the US will end up relying on pressure, triggering Iranian obduracy and we will be back where we started.”