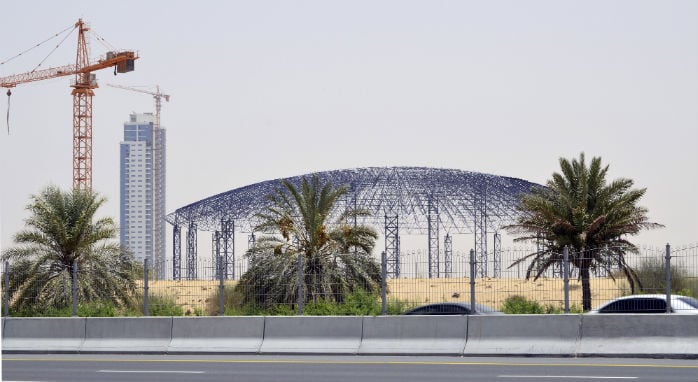 A basic frame with structural columns has been erected for the development, which is located within City of Arabia, on Sheikh Mohammad Bin Zayed Road in Dubai. Off-site ride manufacturing in various sites is also underway and shipments are expected to arrive later this year, IMG said in a statement.

The upcoming park will have four zones including Marvel, Cartoon Network, Lost Valley and the IMG Entertainment Zone. Each of the zones will feature themed rides, themed retail outlets and themed merchandise.

While IMG signed on Marvel and Cartoon Network for the first two zones, it is developing Lost Valley, a dinosaur-themed zone in partnership with Falcon Treehouse.

Spread across 1.5 million square feet in its first stage, the development is slated to be the largest temperature controlled indoor themed entertainment destination in the world when ready.

It is designed to attract up to 20,000 visitors per day, the company said.

As Dubai gears up for its ambitious Vision 2020 – aiming to attract 20 million visitors by 2020, the emirate is ramping up entertainment avenues.

Meraas Holding was chosen to develop the project, the first stage of which is expected to be ready by 2014.

The complex, located near Jebel Ali, is set to include an adventure park featuring Hollywood brands, a marine park, a children’s park and a night safari.