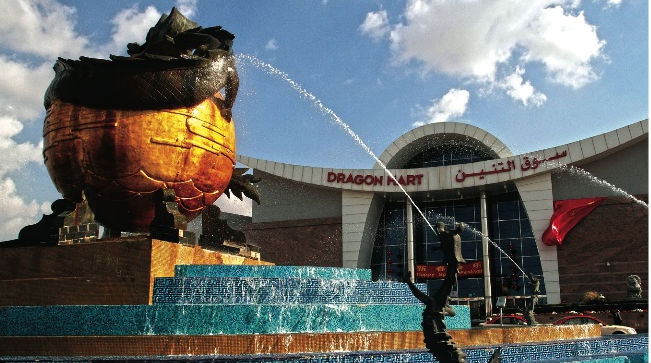 With a GDP that has been growing in double digits for the last 10 years, China has developed an insatiable demand for energy and now purchases more than half its oil from the Middle East. Trade with Saudi Arabia, Kuwait, Bahrain, Qatar and the UAE represents 70 per cent of all Sino-Arab trade.

It’s not just about oil. China has overtaken the US as the largest exporter to the GCC with exports growing to $60 billion a year in the last decade. The Economist Intelligence Unit predicts that by 2020, China will be the GCC’s most important economic partner.

According to Chinese figures, trade with the Middle East and North Africa totalled $111.7 billion in the first half of 2012, a year on year increase of 22 per cent.

The largest portion of this trade was with the GCC countries totalling some $77 billion. In 2011, trade for the whole year totalled $196 billion.

While it is still a major oil producer in its own right, China has been a net importer of crude since 1993. By 2003 the country had become the largest global oil consumer after the US.

With more than half of China’s vast population now estimated to be living in cities and towns, energy consumption is expected to continue to grow faster than at any previous time. Since urban dwellers consume four times as much power as rural populations it is likely that even if economic growth slows China’s oil consumption will continue to rise.

As a result trade between China and the Gulf is expected to more than triple to at least $350 billion in the next decade. McKinsey has forecast that trade could even rise to $600 billion in the same period.

China now sources 35 per cent of its oil imports from GCC countries, in particular Saudi Arabia. In February, the latter was supplying 1.39 million barrels-a-day to Chinese customers – an amount 39 per cent higher than a year earlier.

Since 2002, Saudi Arabia has been China’s top supplier of oil by supplying more than one fifth of Beijing’s crude imports and replacing the US as the Kingdom’s top export partner.

The growing Chinese presence is illustrated in Nakheel’s development of the 1.2 kilometres long Dragon Mart in Dubai, one of the world’s largest retailing centres focused on Chinese goods.

David Eldon, chairman of HSBC Middle East, says he expects to see this remarkable increase in China-Arab trade continue over the next few years as the Chinese economy overtakes the US as the world’s largest economy, possibly as early as 2016.

Outgoing Chinese prime minister Wen Jiabao made a tour of the Gulf in January this year designed “to promote development of China-Arab relations and relations with the Islamic world.”

China wants Saudi Arabia to open up its huge oil and gas resources to more Chinese investment. This process is already under way and was boosted by Prime Minister Wen Jiabao’s Gulf tour earlier this year.

A number of potentially significant deals were concluded during the visit including a civil nuclear pact with Saudi Arabia for help with the Kingdom’s plan for a $100 billion programme for 16 nuclear reactors by 2030.

There is a growing industrial collaboration between the Kingdom and China. In 2007, Saudi Aramco and China Petroleum & Chemical Corporation (Sinopec), and the US’ ExxonMobil concluded an agreement to fund a petrochemical complex and refinery in Fujian province to use Saudi heavy crude. There are now proposals for a second refinery.

Another result of Wen Jiabao’s visit was confirmation in March of an $8.5 billion joint venture between Sinopec and Saudi Aramco to build a refinery complex at Yanbu on the Red Sea to be operational by 2014.

The complex, which is already under construction, will be one of the largest of its kind ever built covering a 5.2 million square metre area and designed to process 400,000 b/d of heavy crude oil.

Aramco is a 62.5 per cent partner in the venture with Sinopec holding 37.5 per cent of the business. China’s collaboration in major industrial projects in seen in other joint ventures with Saudi and other Gulf partners.

This comes after the commissioning of a $60 million plant near Shanghai designed to produce 50,000 tonnes a year of polypropylene compounds that are used in the car industry and to make household appliances.

China and the GCC are diversifying their bilateral relations beyond hydrocarbons. A new Silk Road is emerging as a force to be reckoned with economically and possibly in time also in political terms.

Charles Freeman, a former US ambassador to Saudi Arabia has commented: “The Arabs see a partner who will buy their oil without demanding that they accept a foreign ideology, abandon their way of life or make other choices they would rather avoid. They see (in China) a country that is far away and has no imperial agenda in their region, but which is internationally influential and likely in time to be militarily powerful.”

While trade flows with struggling economies in Europe and the US has faltered, China’s economic ties with the Gulf have continued to grow significantly even in the aftermath of the global financial crisis.

This bourgeoning trade could develop much faster if China concludes a free-trade agreement with the GCC. Five rounds of negotiations have been held since 2004. An agreement, while lowering the cost of exporting oil and other goods to China, would also mean a greater flow of Chinese manufactured goods and industrial equipment flowing to the Gulf.