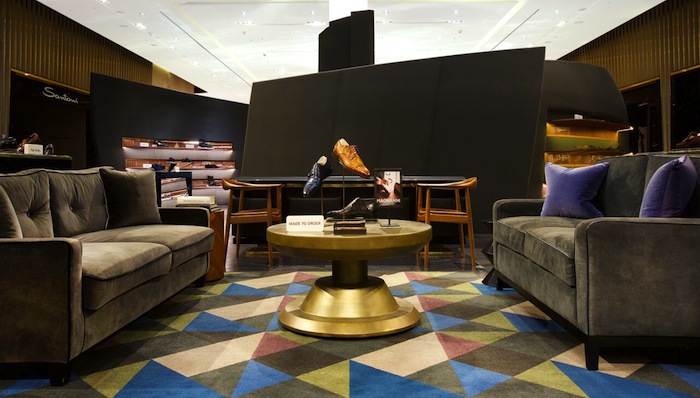 The retailer has doubled the space at its Level Shoe District in The Dubai Mall to 3,000 square feet.

The classic zone offers a range of 11 styles in exotic leathers such as alligator and lizard and Paolo Scafora offering calf leather in five styles.

Prices range from around Dhs 18,000 (for alligator boots) to Dhs 570 for handcrafted leather sandals.

The retailer is hoping to double sales and footfall with the new men’s designer area.

“The Gulf Cooperation Council luxury consumer travels a lot, is very well informed and is continuously looking for the best in class in terms of quality, service and experience,” said chief executive of Chalhoub Group Patrick Chalhoub.

“Men in this region are becoming more and more demanding when it comes to fashion and footwear. In line with this evolution, we have created within Level Shoe District a fully bespoke experience appealing to each of the profiles of the three dedicated men shopping zones.”

The expansion has been fuelled by the growth potential in the men’s market, which has outpaced that of womens’ wear for five years now, the company said.

Research by the NPD group last year found that the men’s footwear market in the United States market grew 8 per cent over the previous two years – twice the growth rate of women’s footwear during the same period.

The numbers are even higher in the region – 38 per cent of fashion items bought by men in the GCC countries are shoes, whereas globally that number stands at 21 per cent, according to Chalhoub estimates.

“He is more a spender than a browser therefore we don’t want him navigating through a labyrinth of products without a clear path towards exactly what he is looking for.”

Growing interest in the men’s footwear market has also roped in fashion houses.

Lanvin, Gucci and Prada have opened dedicated men’s-only flagship stores while accessory brands such as Berluti have launched a full range of men’s ready to wear.

“The internet provides instant information, full of insight and inspiration, which in turn is driving demand and raising expectations. There is a great appetite for instant gratification.”