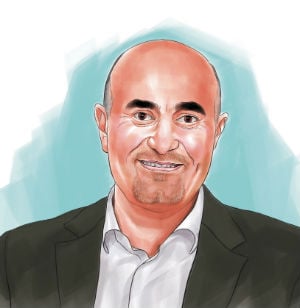 The year 2014 has been good to Souq.com. It was a year in which we experienced unprecedented growth, and further strengthened our position as the e-commerce leader in the Middle East.

The online shopping market has been growing at a rapid rate in this region. In 2014 it grew a further 34 per cent, bringing the value of the market to $10-12 billion. We also grew faster than the industry average and saw an annual growth of over 100 per cent.

To put it in numbers, we are now experiencing over 30 million visits per month on Souq.com. To put this further into perspective, we get a similar amount of traffic to twitter in our key markets. Google also reported Souq.com to the second most searched for brand in 2014 in the UAE.

Mobile commerce has been a huge driver of growth in 2014, both for Souq.com, and for the Middle East’s online market as a whole. M-commerce grew 170 per cent in 2014, and on Souq.com, we saw approximately 45 per cent of our sales originate from mobile devices.

In 2014, we launched many new initiatives, technologies and innovations that have enabled us to deepen our relationships with our customers and provide them with greater value and service than ever before.

Building on the additional $75 million investment that we received from Naspers Global in March, we have expanded product categories on Souq.com, further developed our mobile platform, and enhanced our operating processes and logistics, including last mile fulfilment.

As well as being a year of leadership and growth, 2014 has also very much been a year of firsts for Souq.com.

We launched our first mobile app for Apple, Android and most recently Windows. The app has seen almost two million downloads to date, and was listed by Apple as one of 2014’s top five mobile apps on the App Store for the region.

We also launched the White Friday promotion the region for the first time in 2014 – our take on the Black Friday sales, which are seen annually in the western world.

White Friday weekend was a resounding success, and the biggest online shopping weekend that this region has seen to date. On that weekend, we sold 246,000 products and saw a ten-fold rise in visits and customers.

We also launched a new “factory-to- consumer” business model, allowing us to deliver unparalleled value to our consumers.

By giving product manufacturers the ability to use Souq.com as the primary route to market for their products, they are able to cut out distributor, wholesaler and other channel costs associated with bricks and mortar retailing and pass on the savings directly to the consumer.

The best example of this is the launch of the new Infinix Zero smartphone,which we introduced to the region during White Friday, at Dhs499.

Although we have a very competitive smartphone market in this region, there is undoubtedly a huge consumer appetite for this value – we sold 10,000 Infinix Zero smartphones within 10 hours of launch. Another example is Innjoo, whose sales surpassed 200,000 phones.

Looking at 2015, we expect the e-commerce market in the Middle East to continue to experience strong growth, reaching a value of $15 billion. Mobile will continue to drive this growth – 2015 will indisputably be the year of mobile.

For us, 2015 will be a year of “Think Big”. Big new category launches, big growth in our market place, big improvements in our fulfilment and last mile delivery, big new technology, and most importantly big value to our customers.