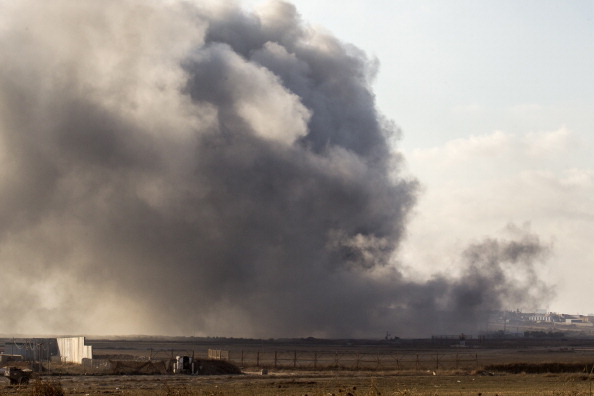 Israeli shelling killed at least 15 Palestinians sheltering in a school in Gaza’s biggest refugee camp on Wednesday, the Health Ministry said, as Egyptian mediators prepared a revised proposal to try to halt more than three weeks of fighting.

Some 3,300 Palestinians, including many women and children, were taking refuge in the building in Jabalya refugee camp when it came under fire around dawn, the United Nations Relief and Works Agency (UNRWA) said.

“Our initial assessment is that it was Israeli artillery that hit our school,” UNRWA chief Pierre Krahenbuhl said in a statement after representatives of the agency visited the scene and examined fragments, craters and other damage.

Blood splattered floors and mattresses inside classrooms at the Jabalya Girls Elementary School and survivors picked through shattered glass and debris for flesh and body parts to bury.

“I call on the international community to take deliberate international political action to put an immediate end to the continuing carnage,” Krahenbuhl said.

The Gaza Health Ministry put the number of dead in the attack at 15 after a local UNRWA official said 19 had been killed. Krahenbujl, however, said it was premature to give an official death toll.

“But we know that there were multiple civilian deaths and injuries, including of women and children and the UNRWA guard, who was trying to protect the site,” Krahenbujl said.

An Israeli military spokeswoman said militants had fired mortar bombs from the vicinity of the school and troops shot back in response. The incident was still being reviewed.

The army said it would hold fire unilaterally in limited areas of the Gaza Strip where soldiers were not operating for four hours from 3 p.m. (1200 GMT) as a “temporary humanitarian window”. It was not clear whether that included Jabalya.

Sami Abu Zuhri, a spokesman for the Hamas Islamist movement which controls Gaza, dismissed the partial, temporary ceasefire as a “media stunt”, saying it would not allow rescue workers to retrieve casualties in combat zones Israel had excluded.

Israel has been shelling in Jebalya, where some 120,000 people live, since Tuesday, in what the chief Israeli military spokesman, Brigadier-General Motti Almoz, described as a slight broadening of its campaign against militants in the Hamas Islamist-dominated Gaza Strip.

UNRWA said on Tuesday it had found a cache of rockets concealed at another Gaza school – the third such discovery since the conflict began. It condemned unnamed groups for putting civilians at risk.

Krahenbuhl said the Jabalya school’s precise location and the fact that it was housing thousands of displaced people had been communicated to the Israeli military 17 times, with the last notification just hours before the fatal shelling.

Israeli tank fire also struck the main market in Jabalya on Wednesday, killing at least three people and wounding 40 others, the health ministry said. Seven members of one family died in an Israeli attack in Deir al-Balah, in the central Gaza Strip.

The ministry said 1,287 Palestinians, mostly civilians, have been killed since Israel began its offensive on July 8 with the declared aim of halting cross-border rocket fire.

In ground operations launched 10 days later, the army has said its main mission is to locate and destroy tunnels that militants have built under the frontier and have used to launch attacks inside Israel.

On the Israeli side, 53 soldiers and three civilians have been killed. Public support remains strong for continuing the military operation in the hope of preventing future flareups.

Mohammed Deif, the shadowy leader of Hamas’s armed wing, said in a broadcast message on Tuesday that Palestinians would continue confronting Israel until its blockade on Gaza – which is supported by neighbouring Egypt – was lifted.

Israel has balked at freeing up Gaza’s borders under any de-escalation deal unless Hamas’s disarmament is also guaranteed.

Israeli Prime Minister Benjamin Netanyahu was due to review progress with his security cabinet later on Wednesday, and a Palestinian delegation was expected in Cairo for discussions on an elusive truce.

In previous bouts of fighting between Israel and its neighbours, the United States has often leaned on the Israelis to stop after incidents that caused high civilian casualties. Washington appears to have less sway with either side this time.

Egypt said on Tuesday it was revising an unconditional ceasefire proposal that Israel had originally accepted but Hamas rejected, and that a new offer would be presented to the Palestinian representatives.

UNRWA, the main U.N. relief agency in Gaza, said it was at “breaking point” with more than 200,000 Palestinians having taken shelter in its schools and buildings following calls by Israel for civilians to evacuate whole neighbourhoods before military operations.

Both U.S. President Barack Obama and the U.N. Security Council have called for an immediate ceasefire to allow relief to reach Gaza’s 1.8 million Palestinians, followed by negotiations on a more durable end to hostilities.

Efforts led by U.S. Secretary of State John Kerry last week failed to achieve a breakthrough, and the explosion of violence appeared to dash international hopes of turning a brief lull for the Muslim Eid al-Fitr festival into a longer-term ceasefire.

In a statement on Wednesday, German Foreign Minister Frank-Walter Steinmeier said he was “extremely concerned about the escalating fighting in and around Gaza” in which civilian infrastructure and U.N. facilities have come under fire.

“Everything must be done to prevent civilian victims and to uphold humanitarian law,” he said. “I urge both sides to agree to an immediate ceasefire and to resume negotiations about a long-term ceasefire on the basis of the Egyptian suggestions.”