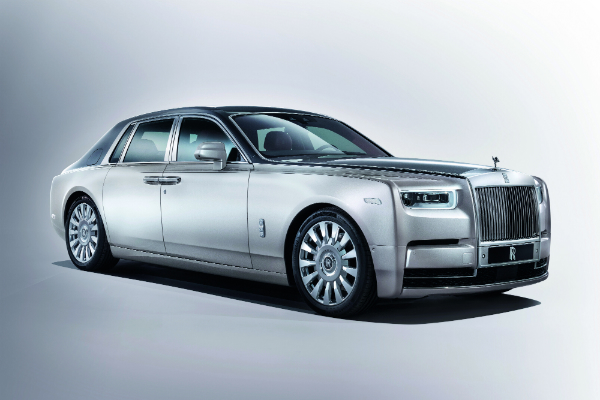 Rolls-Royce’s stately Phantom can justifiably claim to be a monarch of the automotive world, having been in almost continuous production for no less than 92 years – apart from hiatuses during 1940-50 and 1991-2003.

There’s no other nameplate out there that’s even close to achieving centurion status, so the fact that a vehicle that today costs from Dhs1.95m ($530,900) upwards has managed to remain relevant speaks volumes for the strength of the RR badge and the design and engineering that’s gone into each successive generation of the Phantom.

We’re in the idyllic environs of Lake Lucerne in Switzerland to drive the all-new, eighth-generation model, and it follows in the wheel tracks of Phantom VII, on sale from 2003-2017 (about double the usual seven-year lifespan of a premium luxury car).

Although the newbie may not appear drastically different from its predecessor at first glance, look closer and you’ll notice the grille is now integrated into the front fascia and leans it back a few degrees. It formerly stood clear of the bodywork and sat bolt upright. The tapered flanks of the car also create the impression of motion, and the fastback roofline further contributes to this effect.

Motive power for the Phantom VIII comes from a 6.75-litre V12 (naturally), but it now features twin-turbocharging, boosting outputs to an unflustered 570hp and 900Nm to ensure the Roller offers the ‘waftability’ that’s synonymous with the brand.

Rolls-Royce quotes a 0-100kph dash of 5.3sec and top speed of 250kph, but these stats are almost irrelevant for a car that trades on stately elegance and cossetting its occupants, rather than lap records or top-dog status in the ‘traffic light grand prix’.

The most obvious visual differentiator between the old and new Phantoms is the revamped headlight clusters, and these house laser beams that are claimed to be the brightest on offer in any production car, illuminating the road up to 600m ahead.

But the engineering team’s primary effort has been on insulating occupants from the outside world, and the foundation for this is high-tech air suspension and tyres filled with 2kg of ‘silent-seal’ foam to further damp road noise and surface irregularities. There is also a pair of cameras behind the windscreen that scan the road ahead to pre-emptively optimise the suspension for any nasties in the coming tarmac.

The Phantom VIII packs no less than 130kg of sound-deadening material around the cabin, and occupants view the outside world through double-glazed windows in which a pair of 3mm thick panes sandwich an acoustic layer.

What does this feel like from the inside? Uncanny silence is the overriding impression. Premium limo flagships from other luxury brands are all impressively quiet, but the latest Roller has elevated the game to a new playing field as riding in the back now feels a lot like being transported down the road in an elegantly furnished lounge room. There’s a complete absence of drama.

Each of the two rear seats is electrically adjustable, and they can also heat your backside or administer a gentle (perhaps too gentle) massage to your torso. Each also gets its own air-con settings, and there’s an iDrive-style controller for the pair of infotainment screens concealed behind the picnic tables housed in each the front seatbacks.

There’s also a concealed cooling compartment for your drink of choice nestled between the rear seats, and the rear-hinged portals can be closed at the push of a button.

As you’d expect, the level of craftsmanship is sublime, and every moving part inside the cabin has a lovely, expensive-feeling damping to it. The impossibly deep lamb’s-wool carpets, ultra-soft leather and beautifully burnished wood create an ambience that’s suitably lavish for a Dh2m-plus luxury chariot.