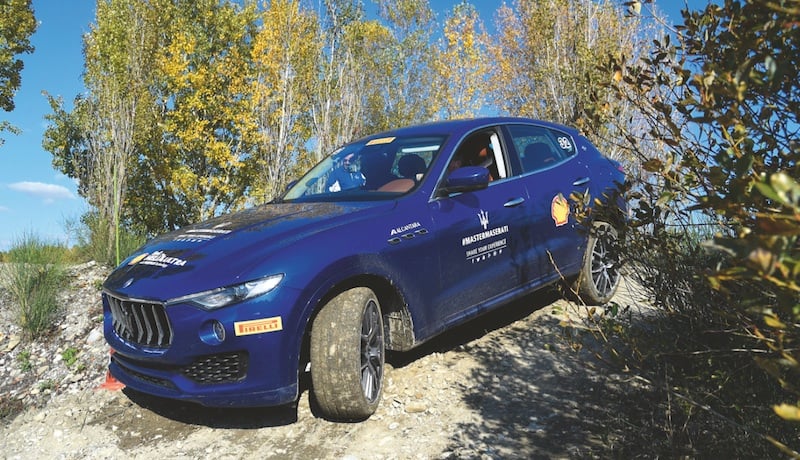 You can’t blame luxury and sports car manufacturers like Maserati, Bentley, Jaguar and even Lamborghini for getting into the SUV game.

While sales in their traditional categories are down by more than 20 per cent, the big, moneyed off-roader segment has climbed 40 per cent in the past five years alone.

The Middle East and North America were the first markets to get the new Maserati Levanté, meaning those of us in the GCC are among the first to see what it’s like. Not only off-road and on-road but on the track as well.

The Levanté was tested on five continents in temperatures ranging from -38C in the Arctic Circle to more than 50C in the UAE deserts. Being based on the Ghibli, it uses the same Q4 torque vectoring AWD system but is predominantly an on-road performance based car with the ability to venture off-road occasionally.

Our test drive started in the UAE, where we ventured onto hard sand – a surface that car handled with ease. We then visited Italy to take part in the day-and-a-half Master Maserati driving school that now also includes the Levanté off-road course. The course is designed to showcase the full performance range of the Levanté from mild to wild, on road and off, but in safety and on private property away from other motorists and police radar.

In one session we tested its handling dynamics through a slalom course on the racetrack, as well as its wet weather grip, stability and braking performance during emergency lane changes.

A few minutes later it was hot laps with an instructor giving tips on how to extract the maximum from it at speed with everything filmed on GoPros and logged telemetry data.

The course then moved to the hills and muddy terrain where the Levanté’s Hill Decent Control was put through its paces as was its impressive 250mm ground clearance, 50mm wading depth, 20 degree breakover angle, 22 degree approach angle and 26 degree departure angle.

With the suspension in the highest setting, it easily climbed over ruts and large rocks, cresting small rises and climbing and descending steep, loosely covered, low grip hills.
It was at this point when thinking back to its on-track performance – clocking 200kmh heading into a heavy braking zone and topping 220kmh on the straight, as well as the design practicality of being a five-door estate – that I appreciated the incredible versatility a high performance SUV like the Levanté provides.

The icing on the cake however is its exhaust note from the Ferrari designed and built V6 which ranges from mild in most situations to fruity for a family wagon when you place it in Sport mode.

Helped along by an eight-speed automatic transmission with super smooth shifts, in most cases it sends 100 per cent of the power to the rear wheels only. But in less than 50 milliseconds, the Q4 all-wheel drive system can split it 50:50 front to rear when traction is needed over the nose.

There’s also a limited slip diff to guarantee traction via the old mechanical way and it features air suspension with six ride height levels for off-roading.

The five settings are essential as, when it’s set in its lowest position, the Levanté has the lowest ride height and the most aerodynamic profile in its class, which is perfect for track work.

If you like leather and wood then you’ll love the interior as it is everywhere from the seats to the door trim and dash, which is dominated by an 8.4 inch touchscreen panel that recognises drag, scroll, swipe and rotate gestures just like a tablet and also includes Bluetooth and navigation.

The centre console houses the drive mode selector, a rotary knob and the air suspension switches, while the classic Maserati analogue clock remains at the top of the dash.